Slash'EM Extended (also known as "Sadistic Levels of Endless X-Citement", or SLEX for short) is a variant of SLASH'EM based on SLASH'EM version 0.0.7E7F2. The object of the game is the same: to fetch the Amulet of Yendor from the bottom of the Gehennom and offer it to your god.

Compared to SLASH'EM, Slash'EM Extended contains several new roles and races for the player to choose from, several new special levels, a lot of new monsters, and other changes. The main dungeon is longer in Slash'EM Extended than in SLASH'EM, with the upper Dungeons of Doom being 50 levels in length followed by 50 levels of Gehennom, meaning that Moloch's Sanctum is on dungeon level 100. After claiming the Amulet of Yendor, the player also needs to complete a 100-level bonus dungeon before the actual ascension run begins, greatly increasing the length of the game. And most importantly, Slash'EM Extended is hard as hell!!!

This variant is actively being developed by the one-woman dev team of User:Bluescreenofdeath (a.k.a. Amy). (and more recently User:Elronnd, so a 2 person dev-team now) The GitHub repository shows all the individual changes applied since version v97.

The subreddit can also be used for discussion about the game.

This section is a must read for new players. It tries to give advice on a number of topics. If you never played a NetHack variant before, especially check out the bolded parts.

Shift-O opens the options menu. The option to switch the movement keys between vi-like keys (hjkl) and the number pad is the number_pad option. Be sure to set it so that you can move around the dungeon comfortably!

The options file is called defaults.nh on Windows and ~/.slashemextendedrc on Unix; it does not necessarily exist on a fresh install

A list of hints (recommended reading for new players) that will hopefully enable new players to learn how to play without dying constantly.

FAQ (recommended reading for new players) answers some of the most common questions that players may have.

A list of Slash'EM Extended's new roles, including their key features and average difficulty rating. The Zyborg, Chevalier and Electric Mage roles are suitable for beginners, while the Convict, Bleeder and Courier are harder-than-hard roles that should be picked by experienced players only. The role selection menu does not work with the curses interface at the moment. A workaround is to start the game in tty mode, select a character, save and then change the configuration file to curses.

A list of Slash'EM Extended's new races, including their key features and average difficulty rating. The Trollor and Asgardian races are suitable for beginners, while the Ungenomold and Alien races should be picked by advanced players only.

Options, hotkeys and commands (recommended reading) shows the various new options and commands that aren't present in other variants. It is highly advised to familiarize oneself with them, since some parts of the game expect the player to use certain new commands (comparable to vanilla's #wipe command, which isn't used often but comes in handy in certain situations).

A rudimentary version history, which is incomplete but tries to give a chronological overview of the variant's features.

A list of Slash'EM Extended's new monsters, including information about their levels, attacks and special abilities.

A list of Slash'EM Extended's new traps, including information about their effects. Some traps are classified as "nasty"; they're very dangerous, and very hard to figure out without spoilers.

Skills in Slash'EM Extended explains what the new skills do (recommended reading for players unfamiliar with the skills). There are a whole lot of new combat skills, some of which may be rather obscure to figure out without spoilers.

Techniques in Slash'EM Extended lists the various techniques available in the game.

Dungeon option templates for those who want to change the glyphs used to represent various dungeon features. Especially important if, for some reason, you don't want solid rock to be displayed as # and would rather have it be invisible like in vanilla NetHack.

Appearance aptnesses are special effects of armor-class items that depend on their randomized appearance. These are also documented in the game.

Dungeon overview shows the various dungeon branches in the game, including some details about what the goals in the various optional branches are, as well as special rules that may apply while the player is in certain subdungeons.

Item materials details the effects of the various item materials present in the game, including showing which erosion effects can affect them.

Monster and item egotypes shows what the different egotypes in the game mean. Egotype monsters are highlighted yellow, egotype items show as "an enchanted foo" to hint at the presence of a special property.

A list of known bugs that should be removed in future versions. Players with coding knowledge are always welcome to help fixing them to make Slash'EM Extended even more enjoyable.

Identifying rings and amulets shows the messages given when dropping rings down sinks, or dropping amulets down toilets. This can be used to identify jewelry.

A screenshot Let's Play by the creator herself, showing off a lot of this variant's features. Audience participation is encouraged by e.g. suggesting role/race combinations for Amy to play.

SlashTHEM Extended, the variant inside a variant! This explains how to activate the special playing mode, as well as detailing the differences in gameplay it entails.

Friday the 13th, playing on the unlucky day also makes SLASH'EM Extended much harder, and for those who don't want to wait for that date, there's another special playing mode that also enables these difficulty elements!

"update these stats! currently they are for version 2.70"

Numbers for the stat lovers: The current version of Slash'EM Extended has 34611 monster species, 6643 objects and object appearances, 2225 artifacts and 535 trap types. There is a total of 165 playable roles and 261 playable races. 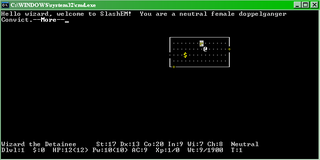 No race or alignment restrictions for the Convict in Slash'EM Extended, either. 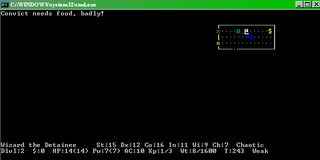 Convicts get hungry early in the game. 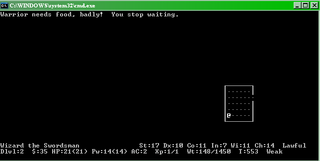 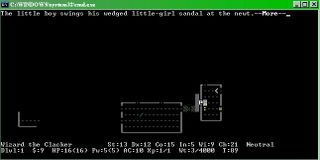 The Transvestite's pet in action. 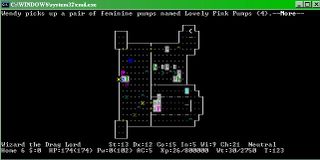 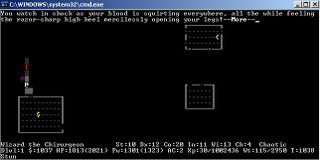 The same quest nemesis, not acting lovely any longer. In fact, the attack shown here can be incredibly deadly and will even get stronger the more often it hits. 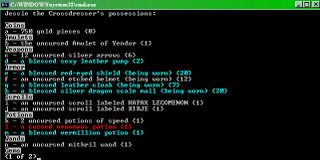 A random Transvestite player monster on the Astral Plane. 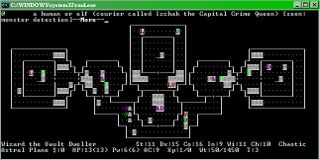 A Courier player monster on the Astral Plane. 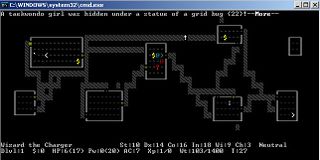 Kops can hide too. 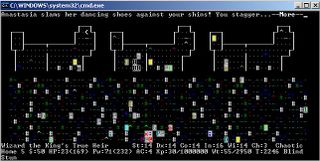 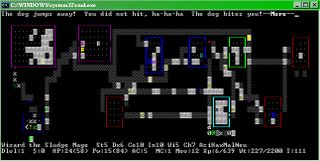 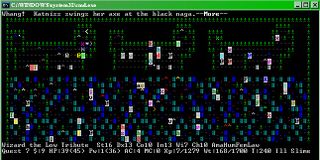 Amazons get a quest with lots of trees, and a well-known heroine to join them in their fight against the nemesis. 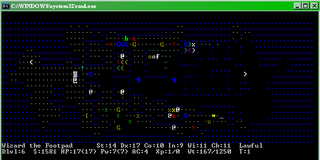 Now all that we'd need would be some pretty, lovely water nymphs... 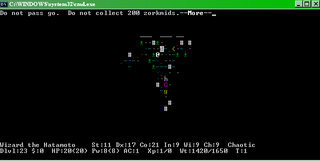 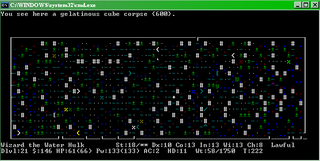 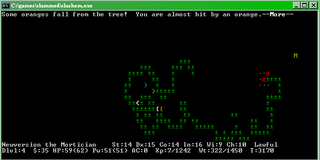 A new variant of a Gnomish Mines filler level. 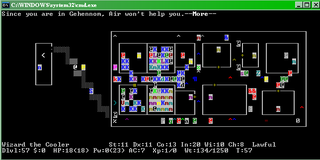 There's a shopping mall in Gehennom, too! 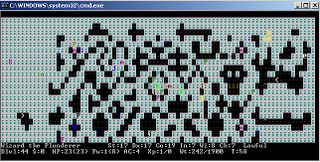 It won't be this bad, but there _will_ be more dangerous sea monsters on water levels. 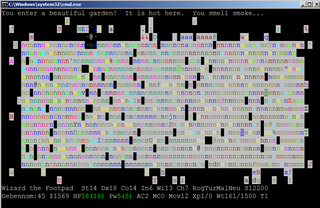 On the other hand, this room can actually get generated. Ranged attacks or spells are advisable to clear out all those nymphs. 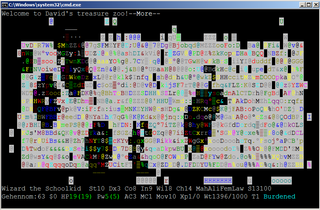 Another very nasty big room variant that can pose a long and arduous challenge. 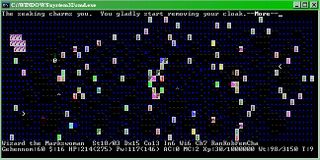 Be very careful around item-stealing sea monsters. They _will_ attempt to drown you while you disrobe.

There are some lovely, sweet new monsters in Slash'EM Extended.

YASD to a nurse's breast-targetting attack 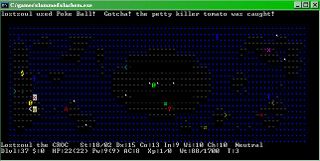 Some monsters can use an embrace attack to prevent enemies from fleeing. 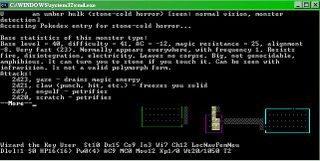 Random "shambling horror" type enemies can end up with extremely dangerous combinations, like this petrifying dude. 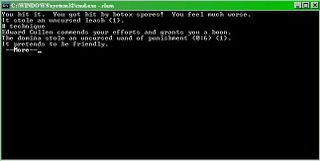 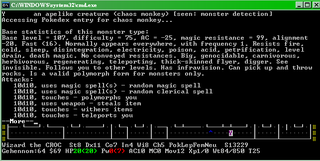 The late game might see the player fight some really powerful foes.

Armor pieces have MC values from 1 to 9, and the highest single value is the player's actual MC, which can be seen on the character stats display with the showmc option. There are a few ways to get more MC, e.g. by casting magic shield or being an inka, allowing the player's MC to reach values of 10 or higher.

Slash'Em Extended has a successor called SlashTHEM, which stopped pulling bugfixes and features from Slash'EM Extended at version v100 though and instead decided to roll back most things to what they used to be like in SLASH'EM, and was confirmed by its developer to no longer be considered a fork of Slash'EM Extended. However, it is also possible to play "SlashTHEM Extended" by picking the Soviet race in Slash'EM Extended, which makes the game behave in a way similar to SlashTHEM.

It ought be noted that SlashTHEM, unlike everything else in this timeline, does not add stuff based on SLASH'EM Extended, but rather reverts many of its changes and makes its own all-new changes instead, some of which were then ported to SLASH'EM Extended. Based on the raw amount of new features and other changes, SLASH'EM Extended has by far the most, while SlashTHEM has "only" slightly more than regular SLASH'EM. Also, the last commit to SlashTHEM was in July 2016, after which the project became abandoned, while SLASH'EM Extended kept being actively developed.

Slash'EM Extended is currently being hosted at em.slashem.me (ssh slashem@slashem.me).

A windows binary is available (alternate link). The source code can be accessed on GitHub or as a zip archive.

The windows version may also run on Unix systems with Wine or other emulator tools. For UNIX systems: It should compile in Linux systems, they will probably be problems in BSDs and Macs.

Here how to compile it on most unices. If it doesn't work then go make an issue or complain on IRC.

You get the picture. You need ncurses, bison, flex, and GNU make.