From NetHackWiki
(Redirected from ToME)
Jump to navigation Jump to search 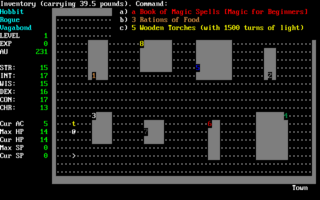 A screenshot of a town level in Angband

Angband is a roguelike computer game in a style somewhat different from NetHack. Angband and its variants are popular enough to rival NetHack; some classifications divide roguelike games between "hacklikes" and "bands".

Angband is named for the fortress Angband, a location in J.R.R. Tolkien's Middle-earth. Angband and most of its variants have a Middle-earth theme; the usual goal is to go to the bottom of the dungeon and fight Morgoth.

Among the variants of Angband was a game called ToME which initially stood for "Tales of Middle-earth". Newer versions of ToME aren't based on AngBand, and have different names with the same acronym.

The hallucinatory monsters of NetHack include some monsters from Angband. When hallucinating, you may find:

In the source code (at do_name.c#line888), NetHack credits Morgoth to Angband. The dragon is credited to Angband's ancestor game Moria, while Ents are credited to Tolkien's Lord of the Rings; both also appear in Angband, and Middle-earth is also the original source for Morgoth. Angband and NetHack also share various other elements from Middle-earth - e.g., lembas wafers, mithril objects, and monsters such as the hobbit and the balrog.

In Rogue, the goal was to obtain an Amulet of Yendor. Moria deviated from Rogue by featuring a town above the dungeon and by not featuring the Amulet; the goal was to kill a balrog. Angband lengthened the game and featured the goals of killing Sauron and then Morgoth.

Hack, though retaining the Amulet, added features like persistent levels, pets, and shops. NetHack changed the game even more with additions like dungeon branches.

Development of Angband and NetHack continues today - both games have spawned many modified versions and patches, and their respective communities consider them to have developed concrete enough identities of their own to be called vanilla versions, in contrast to variants like ToME and SLASH'EM.

Angband has been free and open source software since January 2009 thanks to the Angband OpenSource Initiative [1], putting it in a similar situation to NetHack under the NetHack General Public License. The previous license was inherited from Moria and prohibited selling copies of the game, making it impossible for operating systems like Debian to include Angband when selling physical media.

There are many Angband variants; the Moria license did not contain explicit permission to modify the game, but many variants predate the relicensing.

Angband is a much longer game than NetHack; Angband's dungeon is of effectively unlimited size. It may take weeks to play an Angband character from the beginning to the triumph over Morgoth (or to a late but permanent death).

Moria added a town just outside the dungeon entrance. While NetHack players cannot leave the dungeon until they find the Amulet of Yendor, Moria and Angband players can repeatedly visit the town, using the services and shops. Central to the Angband is the Scroll of Word of Recall, an item that warps you between town and the deepest visited dungeon level. Some Angband variants even let you leave town to find other dungeons and towns.

The NetHack Guidebook makes clear that the entrance to the dungeon is nowhere near town; thus one can guess that this is why leaving the dungeon without the Amulet ends your game:

"You spend one last night fortifying yourself at the local inn, becoming more and more depressed as you watch the odds of your success being posted on the inn's walls getting lower and lower.

"In the morning you awake, collect your belongings, and set off for the dungeon. After several days of uneventful travel, you see the ancient ruins that mark the entrance to the Mazes of Menace." – NetHack Guidebook, Chapter 1 "Introduction"

Angband shops are somewhat less fun than the ones in NetHack; they consist simply of menus for buying and selling items, with no possibility of theft. More recent versions offer a "no_selling" option where the average amount of gold in the dungeon increases but items cannot be sold to shops, which eliminates a great deal of repetitive play.

Items in shops are identified, so shopkeepers will not bother selling cursed items or useless stuff (like the potion of blindness). You can also identify things by selling them; this is great for unknown scrolls, potions, and magical devices from the dungeon; this helps, because the number of different potions, scrolls etc. is several times greater than in NetHack. (In recent versions, use-testing items cannot kill you so it is more conventional to play with "no_selling" and identify items by using them.) There is no "price identification" because shopkeepers never identify items until after they buy them. Instead, shopkeepers pay a base price for unidentified items.

Shops are reliable sources of food and basic items; beginners can supply themselves well if they have money, however the dungeon is the only source of better and more enchanted items. Food supply is limitless and thus largely a non-factor unless one is playing an ironman game.

(There is an option to center the screen on the @, as in Linley's Dungeon Crawl, but the game typically disables this by default. Instead, the map jumps to another panel as you approach the edge. You might also experience surprise attacks from offscreen monsters as you approach the edge. So you may want to enable that center_player option. Or alternatively, just hit ^L to re-center the screen manually when you're getting uncomfortably close to the edge of the screen. Additionally, be sure to have the list of currently visible monsters showing in one of Angband's satellite terminals (this is the default), and pay attention to it.)

Larger levels make room for larger rooms and longer corridors. Each level takes longer to explore; in fact some Angband players will take the first staircase instead of fully exploring a level.

Now here is how it might appear in the dungeon of Angband:

Angband does not have persistent levels. If you return to the same depth, Angband generates a new level with new monsters and items. A consequence of this is scumming; the process of repeatedly going up and down a staircase until Angband generates a good level (made known to the player by level feelings). Because you cannot revisit a level, Angband players do not leave stashes of items like NetHack players would. Instead, the Angband town provides a home where players can stash extra items to free their inventory slots.

As you fight monsters in Angband, the game will gradually memorise their capabilities. Fight enough of a particular monster, and the game's monster memory will describe how many times you killed each type, how fast the monster moves, what attacks it has, and what level it normally appears on. Angband also has the odd feature that you retain your monster memory after death, when using the same save file to start a new character.

NetHack only gives a vague description of the monster, usually a quote from literature. When playing NetHack, you must remember those monsters yourself, or consult some bestiary of spoilers.

When using a ranged attack, Angband lets you target any nearby monster; NetHack restricts you to firing in eight directions. However, Angband does not have symmetric field of view, especially around corners, so players exploit this to target monsters who cannot see to target the player. (For examples of this, see the "line of sight" explanation in Lord Dimwit's Advanced Strategy Guide for ToME, section 3.3 "Fighting Monsters that Summon Stuff".)

Angband objects have some of these characteristics, however not in the same way. NetHack applies a B/U/C system to all items, and NetHack curses can have many undesirable effects, such as less healthy potions. However, an Angband curse is only a "tag on" property of the item that prevents you from taking it off, but does not normally degrade the item. (Like NetHack, Angband does generate cursed weapons and armor with negative enchantments.)

In some ways, Angband objects can be even more complex than NetHack objects, especially in Angband variants. For example, ToME has:

Sometimes, the Scroll of Identify does not reveal all these advanced properties, and one must use a Scroll of *Identify* instead.

Probabilities control the generation of items in both games. These probabilities remain uniform in NetHack across dungeon levels, though they differ between branches; this is why the Gnomish Mines has more tools. But in Angband, each item has an associated dungeon depth. In general, Angband items become progressively more powerful as the hero descends deeper into the dungeon. Down there, weapons and armor have better enchantments, and there are more and better artifacts. In ToME, even wands will feature higher base levels. A winning player often wields and wears several artifacts simultaneously!

Both NetHack and Angband players can wield weapons, wear armor (in several armor slots), and put on rings and amulets. In Angband, wearing something frees an inventory slot, which is useful because Angband only has 23 slots (a to w). Even when counting equipment slots, Angband still has fewer slots than NetHack, which gives you 52 slots (a to z and A to Z). In addition, NetHack has containers like bags and chests to hold many screenfuls of items; Angband does not.

However, Angband has fewer kinds of item, and items that are not immediately required can be stored in one's home on returning to town. Part of the game's long-term strategy is recognising which items should be retained in the home's limited capacity, and building up a stock of powerful consumables for the final battle with Morgoth.

Wikipedia has an article about:
Angband (computer game)

RogueBasin has a wiki page about:
Angband