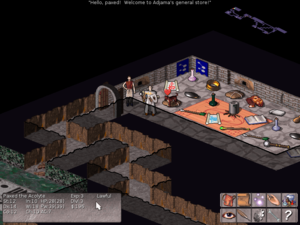 A screenshot of Vulture's Eye. 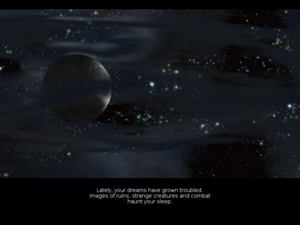 First screen of the graphical intro.

Vulture is an isometric graphical user interface for NetHack, SLASH'EM, and UnNetHack. The Vulture project continues the abandoned Falcon's Eye project and is maintained by Clive Crous.

Vulture is an answer to anyone who believes that the interface of NetHack is too primitive. Vulture contains comparatively lavish graphics and also boasts background music and sound effects.

Vulture was previously known as Vulture's Eye for NetHack and Vulture's Claw for SLASH'EM, or generically as Vulture's to refer to both projects. Clive Crous has renamed the project simply "Vulture" to reflect its forthcoming embrace of UnNetHack and SporkHack.

Vulture was recently added to Steam, and there are plans to include SLASH'EM and UnNetHack as free DLC.

The website provides Vulture in free download as source code for multiple platforms. Binaries, previously available for free download, are now commercial. The developer has stated that the source code for the Vulture project will remain free and open. The distribution is not a patch; it includes a copy of NetHack or SLASH'EM, with modifications to support Vulture.

To install Vulture for Unix, you can use the Debian/Ubuntu packages or you'll have to fetch the source code and compile it. To compile it, you will need to have libpng, SDL, GNU make, and a compiler (such as gcc). There is also a precompiled version for the Nokia N900 Phone & Internet Tablet available through the Maemo Program Manager.

To install Vulture from source on Mac OSX, see this gist

Vulture is also available on Desura and Steam.

Vulture's 2.0.0 was released in April 2006. This release was an involved rewrite of the old core. The game now works with true transparency, 24-bit color, and relies extensively on SDL for its core drawing routines.

Sometime after 2.1.2, Vulture's was renamed to Vulture.