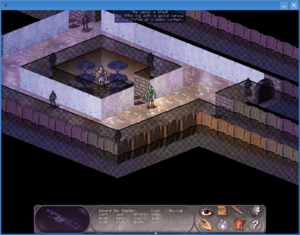 Falcon's Eye was an isometric GUI for NetHack, based on version 3.3.1. Plans to adapt it to version 3.4.0 were announced on its webpage, but never completed, along with an announced Falcon's Claw project, applying Falcon's Eye's GUI to SLASH'EM.

This project has been superseded by Vulture's Eye, which expanded to encompass SLASH'EM and UnNetHack.

It featured comparatively lavish graphics if compared to ASCII or even tiles mode, music, and mouse-driven gameplay, including a sort of far look command via tooltip, keyboard play being still possible.

Falcon's Eye rotates the map by 45 degrees, meaning that the 'north' direction in ASCII/tiles becomes 'northwest' in Falcon's Eye.

The project was abandoned sometime after 2005.

Its web site is still live at http://falconseye.sourceforge.net/