"How is IBMgraphics related to DECgraphics? Strategy: Which one is better? Also, interaction with the curses interface"

IBMgraphics is an option that displays walls as continuous lines rather than as broken dashes, which is the best that plain ASCII can do. It also displays certain dungeon features with distinct symbols, and on some systems makes the Rogue level look more like the Epyx version of Rogue. It is similar to DECgraphics, but has a larger character set.

IBMgraphics requires a display device that displays code page 437, or a compatible code page. Many users of Microsoft Windows outside the United States have their terminals set to another code page, often code page 850, and this can affect the appearance of some symbols.

To use IBMgraphics, the option must be set to TRUE, either in-game or in the configuration file.

The complete symbol list for the normal dungeon is found in the array ibm_graphics in drawing.c.[1] The corresponding ASCII symbols are in defsyms.[2] Those symbols affected by IBMgraphics are listed here.

Certain objects have their appearance changed in the Rogue level; the array IBM_r_oc_syms governs this.[3] The exact changes are different on Linux than on MS-DOS and its descendants. The list here shows the more complete list used on MS-DOS.

A number of map symbols are also changed[4] and all creatures otherwise appearing as @ instead appear as ☺.[5]

There are code pages other than 437 that will also display IBMgraphics correctly, because they differ only at code points that are not currently used by NetHack. These include 860 (Portuguese), 861 (Icelandic), 862 (Hebrew), and 865 (Nordic), and can be useful when code page 437 is unavailable.

Some other code pages will not quite display IBMgraphics perfectly, but are close enough to be usable when none of the above code pages are available. Some of these are shown in the table below.

Other known code pages have few of the necessary symbols and are completely unsuitable for IBMgraphics.

On many platforms, it is possible to set the display device to display code page 437 instead of the default code page. This will enable NetHack to display the IBMgraphics as the DevTeam intended.

Make sure CONFIG.SYS contains a line similar to this:

and AUTOEXEC.BAT contains lines similar to these:

This section may also apply to Windows 2003 Server, but is untested on this version.

If code page 437 is not the default, it will be necessary either to configure the console window to use the Lucida Console font, or to run full screen (press Alt-Enter). With bitmap fonts in a window, only the characters for the default code page are loaded, and others do not display correctly. Bug W343-3 is also a problem for this configuration.

Once either Lucida Console is set, or the console window is in full screen mode, it is sufficient to type

and possibly for full-screen mode

and then start NetHack.

On the PuTTY Configuration window (this appears when you first start PuTTY), select "Translation" under the "Window" configuration in the pane on the left. Then, in the pulldown menu marked "Received data assumed to be in which character set", select "CP437". You can then log in to the server as usual. You may also change this setting and then 'save' the session. The character set (as well as other display settings, e.g., the color blue) will be used in your session from then on.

If your system uses a Unicode console, disable it (for the current session) with:

Then re-load the default text font with one of the two following commands:

Finally, you may need to load the CP437 translation mode:

If any of these commands fails, try running it as root by preceding each command with "sudo " (e.g., "sudo unicode_stop").

Load the CP437 console font with:

Or add this to /etc/rc.conf to make it permanent:

While most terminal programs for X11 readily support DECgraphics, they need additional setup for IBMgraphics. The usual way is to set the encoding to code page 437. The exact procedure to do this depends on the terminal program.

You also need a font that provides the necessary characters. X11 already provides at least one such font: the "fixed" font. It is already the default font for xterm. To preview it or to check that you have it, use one of these xfd commands:

If you choose a font like Bitstream Vera Sans Mono, then X11 may substitute another font for some characters, causing graphical glitches if the two fonts have different monospace metrics.

If your terminal supports UTF-8, but not code page 437, you can use konwert or filterm to transcode NetHack's output into something your terminal understands. Invoke one of them as follows:

You will probably need to install these programs before they can be used. 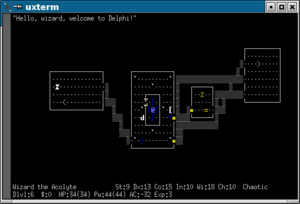 An xterm using CP 437, showing IBMgraphics on the Oracle level.

When you invoke luit, it starts a new shell (from where you may start NetHack). When you exit your CP 437 shell, luit exits and you return to your UTF-8 shell. 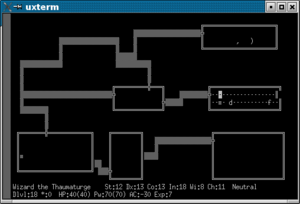 Oops, xterm with CP 437 has serious glitches on the Rogue level. Click image for details.

Unfortunately, your xterm will have serious graphical glitches at the Rogue level, because unlike a real IBM PC, luit does not map ASCII control characters to graphical characters (such as 0x01 to a smiley face adventurer). You may need to disable IBMgraphics while playing the Rogue level.

You can also install a CP437 or "VGA" font. There are several of these floating around the net; a nice one is included with bochs-2.0.

KDE does not have an encoding for code page 437, or any similar encoding.

In menu Settings -> Encoding, if you select "Cyrillic (ibm866)" or "Western European (ibm850)", then the encoding will the walls, floors, doors and corridors for IBMgraphics, but fountains and moats will look strange. A better option is to select "Unicode (utf8)", then invoke luit as you would in an xterm. 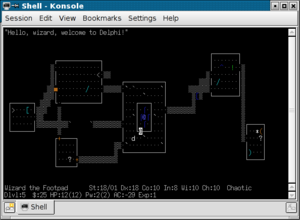 Konsole can do IBMgraphics, with some help from luit.

To configure Konsole for IBMgraphics:

When you invoke luit, it starts a new shell (from where you may start NetHack). When you exit your CP 437 shell, luit exits and you return to your UTF-8 shell.

If you saved an "ibm" profile, then konsole -profile ibm will start a Konsole with the same settings. You still need to invoke luit -g2 'CP 437' before you start NetHack with IBMgraphics. If you add a "Terminal Sessions" applet to your KDE panel, you can also access your profile with Terminal Sessions -> New Session Using Profile -> ibm.

Unfortunately, your Konsole will have serious graphical glitches at the Rogue level. This happens if you set Konsole to utf-8 and use luit, or if you set Konsole to ibm850 or ibm866 and do not use luit. Either way, the software will not map ASCII control characters to graphical characters. You may need to disable IBMgraphics while playing the Rogue level.

The current gnome-terminal does not have a setting for code page 437, but it does support other code pages that are equivalent for NetHack's purposes, such as 862 (Hebrew).

To set code page 862 on gnome-terminal:

The above steps only need to be done once for the lifetime of the Gnome installation. Once done, it is sufficient to:

It should be noted that the current default gnome-terminal font in Ubuntu Jaunty fully supports DECgraphics as long as eight_bit_tty is set to false.

The Terminal application that comes with OS X seems to work well on an external SSH server, if one just sets the right encoding. "US Latin (DOS)" seems to work well (if I've understod correctly this means CP437). Also, you need a good monospace font, "Andale Mono" seems to work well; however, I haven't done any extensive testing, and the following questions remain (please remove / edit if you have tested these):

You probably could also use luit (or konwert and filterm if you can find / install them for OS X) as in Linux X11 terminal applications, but for me luit didn't work well in Linux nor OS X on a public SSH nethack server.

There is a packaging bug with the official Mac 3.6.0 package which omits the "symbols" file required for any symset to work. See the bug M360-1 in the official Bugs page. This file can be obtained from another port / source archive and copied into place as follows (in Terminal, you will need to type your superuser password): sudo cp symbols /Library/NetHack/nethackdir/

Some users may prefer to set their own symbols, either because they don't like the existing ones, or because it's easier than setting code page 437 just to play NetHack. See Custom map symbols for further details.

A user has posted an experimental patch to RGRN (here's what it changes) allowing display of the IBMgraphics characters using UTF-8, rather than a special code page. Compatible terminals include the Linux console for kernels since 1.2.1, any Unix-like platform running a recent version of X11, and PuTTY for Windows users accessing public servers. The original is a patch against NetHack 3.4.0; Stephen Anthony Uy has adapted it for 3.4.3.

This page may need to be updated for NetHack 3.6.

Editors: After reviewing this page and making necessary edits, please change the {{nethack-343}} tag to {{nethack-36}} or {{noversion}} as appropriate.