New levels in the Dungeons of Doom

Mephisto's Lair: The demon lord Mephistopholes lurks in a fort surrounded by lava.

Malcanthet's Lair: A garden full of nymphs and foocubi, ruled by the demon lord Malcanthet.

Minetown: There are new Minetown variants: the Zoo Town from SporkHack/EvilHack, and the spooky Lavender Town. 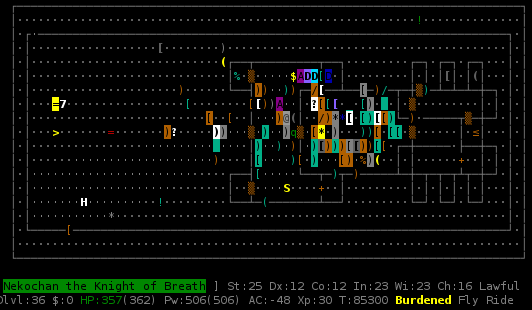 The first level of Vlad's Tower has been replaced by a large courtyard and castle structure. Alucard can be encountered here. [1]

The Castle: A number of minor features are randomly generated.[2]

Asmodeus' Lair: Asmodeus now has a fortress of his own, on an underground riverbank.

Baalzebub's Lair: Baalzebub's central complex is surrounded by a swamp.

The bar: the Bar is an homage to the Guild of Disgruntled Adventurers from SLASH'EM. The level has many player monsters fighting each other, potions of booze, and a bar run by a peaceful Barkeep.

The Lost Tomb: The Lost Tomb has lots of potions, scrolls, spellbooks guarded by an army of undead.

Black Market: The Black Market sells an enormous variety of items at rather exorbitant prices.

The Plane of Ice: A level with icebergs randomly drifting around, similar to the Plane of Water except that its possible to fly, levitate or jump between icebergs. It is located between the Plane of Air and the Plane of Fire.

The following branches and levels have been removed: