Dudley's dungeon is a NetHack-themed webcomic about the adventures of a player character named Dudley.

The first run of Dudley's dungeon was launched on February 2, 2004, created by Dion Nicolaas and hosted at his personal website - it would finish on the last day of 2008, and the code used to create the comics would be made available to whoever mailed the author.

From there, two separate continuations appeared:

This webcomic is set in NetHack. Our hero, Dudley, wants to obtain the Amulet of Yendor. The webcomic is in ASCII, like NetHack in tty mode, so you can read it even if your web browser does not load graphics. However, do not forget to set proper options when reading it from a text browser (such as w3m or lynx), since otherwise popup explanations will interfere with the text of the comic. 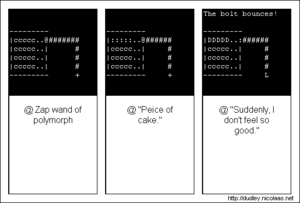 A screenshot of a fan-made comic made in the interface.

Anyone may design and submit, to either of the two new sites, their own version of a Dudley comic for it to be commented and voted upon when published.

Characters and locations from the webcomic