Oddly enough, I found a woodchuck on my current run. I have no idea how it came to be in the game, but I did tame it using charm monster. Even more oddly, it seems it can survive under (or over) water and it eats walls. It's proven to be very helpful in the mazes of Gehennom, moreso since it is stoo weak to start a fight w/ anything and therefore requires very little protection. 205.152.67.36 21:35, 12 August 2009 (UTC)

My guess on it's appearance is a polymorph trap on the level. Woodchucks are a valid polymorph form, and I have seen several while purposely polymorphing monsters. Qazmlpok 01:30, 13 August 2009 (UTC)

I’m inclined to agree w/ Qaz regarding the origin of the woodchuck in this game. I let my monster detection lapse when the woodchuck was generated, so I can’t be certain if it was a polymorph trap or not, but the polymorph trap seems most likely. Other possibilities would be activation of a statue trap or use of a figurine, but I don’t think monsters would activate either of those.

I'm pretty sure figurines or statue traps cannot be randomly generated for monsters that do not appear randomly in the dungeon, but I can't give a source ref. As for the woodchuck, I've seen them 2-3 times in plain vanilla 343, and each time it was due to a polymorph trap. -Tjr 15:21, 13 August 2009 (UTC)

Woodchuck appeared on Medusa's level, with announcement "The woodchuck shrinks out of its wrapping!" 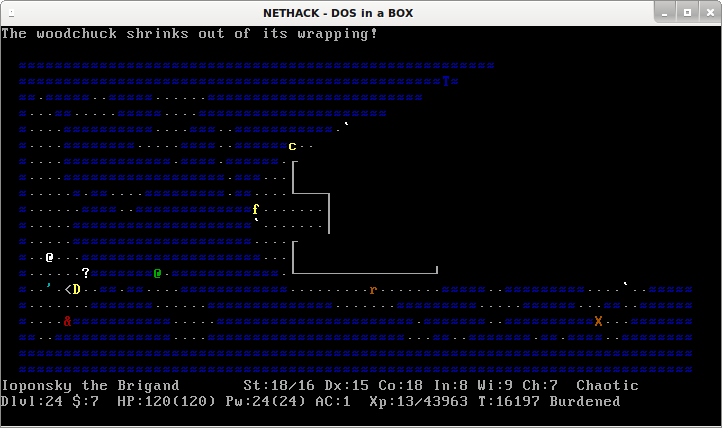 Some mummy stepped onto a polymorph trap, I think. The message indicates woodchucks are too small to fit into mummy wrappings. —bcode talk | mail 10:44, 10 August 2013 (UTC)