Gnome With the Wand of Death 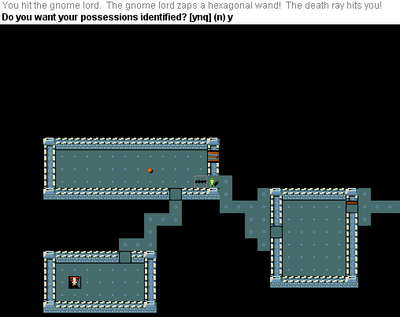 The wrath of the RNG

Intelligent monsters can make use of attack wands; this includes both very weak monsters and very powerful wands. In the extreme case, the Random Number God will dispatch a gnome that came across a wand of death – a proverbial unfair way to die. In the webcomic Dudley's dungeon, this gnome is formally named the Gnome With The Wand Of Death, or GWTWOD.

Such well-armed creatures sometimes appear very early in the game when the player has no means of defense, especially in the Gnomish Mines.

To lessen the risk, pick up any unknown wands you find on the floor. Do not make the mistake of allowing some kobold to later grab that wand and zap you with lightning. When it's convenient for you, engrave-ID the wands you have collected to determine which ones are safe to leave lying around.

Intelligent hostile monsters that lack damaging attacks, such as foocubi, nymphs, and nurses, may still attack you with wands. Nymphs are particularly dangerous, because they may steal a wand from you and then zap it at you, especially on non-teleport levels.

The idea of a gnome with a wand of death has been about for some considerable time; the first use of the meme in rgrn appears to have been by Torsten Edelmann in 1996, and it is described as proverbial by 2002.