From NetHackWiki
(Redirected from Pound)
Jump to navigation Jump to search 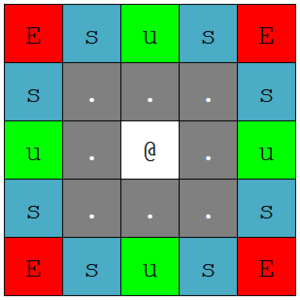 Players can pound colored squares, depending on their skill level.

When twoweaponing, the range for pounding is determined by the lesser of your polearm or lance skill and your two-weapon combat skill. This is only possible with a lance, because all other polearms are two-handed.

Unlike normal combat against an adjacent target, a lance can be used for pounding without any penalty even when the wielder is not mounted.

Some players like to use polearms to pound dangerous sea monsters on levels such as Medusa's Island, the Castle, and the Wizard's Tower because it allows you to remain safe from their drowning attacks.

As of NetHack 3.6.0, pounding can scuff engravings beneath you, just like attacking in melee.[1]

Pounding is an excellent strategy for hitting both melee and ranged targets; if you have adequate speed and at least Skilled level, you can attempt to kill a group of opponents at a choke point (such as a door) a knight's move away. If you plan on pounding in corridors, though, you will need either a light source or infravision, as you cannot pound a monster you cannot see (even if you can detect it via other means).

In addition, pounding does not trigger passive attacks, meaning you can use it as an infinite source of safe attacks against dangerous creatures without worrying about running out of projectiles or wand charges.

It may contain text specific to NetHack 3.6.0. Information on this page may be out of date.

Editors: After reviewing this page and making necessary edits, please change the {{nethack-360}} tag to the current version's tag or {{noversion}} as appropriate.