Reviving the corpse of a dead monster is a means of bringing it back to life. Trolls and the Riders have the ability to revive themselves;[1] that is, they will often resurrect a few turns after they are killed. See their articles for strategies on how to prevent this and kill them permanently.

Most actions that try to dispose of a Rider corpse will instead instantly resurrect it. Among other actions, this includes teleporting it, tinning it, or picking it up.

You may also revive any corpse with the spell of turn undead or wand of undead turning. Corpses can also be revived with the cursed Book of the Dead (possible for illiterates), but this method has drawbacks. If you revive a dead adventurer's corpse in a bones level, the ghost will inhabit its original form and disappear, and the corpse will be revived.[citation needed]

When a monster is revived, it is restored to full health, with maximum hit points; part of that is then deducted if the corpse was partly eaten. It will have no status afflictions.[citation needed]

Pets that died while tame usually have a 1 in (tameness+1) chance of becoming untame upon revival. If it becomes untame, it will become either hostile or peaceful with a 1⁄2 chance of each. However, if you killed the pet or abused it more than 2 times, it will never revive tame, and will most often be hostile.[2]

Similar to revival, statues can be brought back to life with stone to flesh or a statue trap.

In the following messages, substitute the names of the involved monsters for the monsters of your choice.

Reviving a corpse by zapping a wand of undead turning, casting the spell of turn undead, or reading the cursed Book of the Dead will produce one of these messages:[3]

When a corpse revives itself, one of these messages may appear:[4]

Some fungi and molds can revive themselves in SLASH'EM. You might just kill the fungus repeatedly, or drop its corpse where the revived fungus will not block the way.

More interestingly, as other types of corpses rot, then mold may grow on them, and the corpse may revive as a mold. This typically produces the "rises from the dead" or "squirming in your backpack" message, as the corpse disappears and the mold spawns. 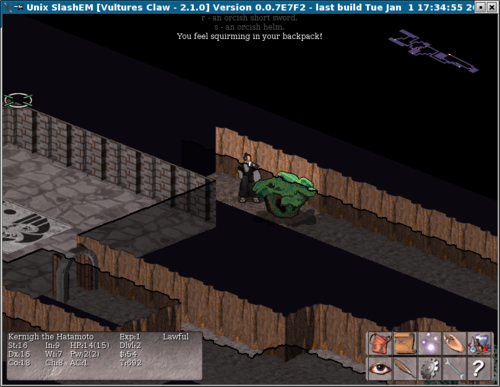 This screenshot, of the Vulture's interface for SLASH'EM, shows a green mold emerging from the inventory of a Samurai.