Do not pass go. Do not collect 200 zorkmids. 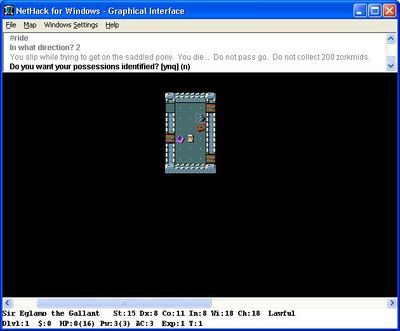 Off to a poor start.

If the player somehow manages to die on or before the first turn (indicated by "T:1" if the time option is enabled), the following message appears:

The message is a reference to the Monopoly board game: Monopoly players periodically pass the Go space on the board and earn 200 dollars each time they do so, and players that end up going to the Jail space must not pass Go, even if Go is between their current position and Jail. The Chance and Community Chest cards that can deliver this penalty read: "Go directly to jail. Do not pass go. Do not collect $200"

Many players never receive this message, but outside of intentional attempts, there are a few rare accidents that can cause it.

To avoid the most common possible source, Knights should simply not try to #ride their starting pony until they can survive the possible 14 HP damage from falling off. If attempting to ride your steed fails on turn 1, do not try to #ride again until the pony has sufficient tameness and/or you have more hit points.

It is also good advice in general to avoid aiming a wand or spell at a wall if the angle of the ray will cause it to bounce back at you, unless you can resist the ray's damage or have a means of reflection. 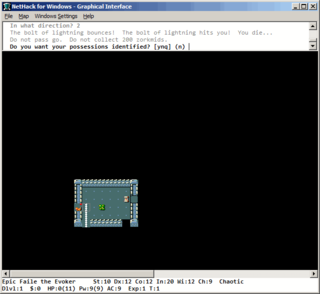 Commiting suicide on the first turn with a wizard's wand of lightning.

On the other hand, there are also a few intentional methods for a curious player to trigger the message; as above, a Knight attempting to ride their saddled pony can do so, although this may "fail" if the game allows them to mount their steed. As mentioned previously, wizards can start with one of many random wands, and may have a powerful wand to zap themselves with, such as a wand of fire or wand of lightning. Casting force bolt or magic missile at yourself will fail because of your cloak's magic resistance.

In addition, wizards and monks start with random scrolls that can assist in intentional first-turn deaths:

It is also possible, albeit time-consuming, to overflow the turn counter to turn 1 and then die, technically fulfilling the condition for the message.

Due to the various reasons above, killing a character on the first turn this way tends to occur when start-scumming wizards, since that player will want to get to the next starting inventory roll as quickly as possible - on sheer averages, this means a first-turn death is very likely to be reported at least once.

For games running over 100000 turns, prayer timeout increases by 1 every 100 turns, so prayer will eventually fail and you will starve to death. This was implemented to prevent denial-of-service attacks against public servers.

If a game runs over one billion turns, it ends immediately in an escape: