The Plane of Air is the second of the Elemental Planes. It is reached by a magic portal from the Plane of Earth. Only monsters that can fly (excluding trappers), can float, are amorphous, are noncorporeal, or are whirly will be randomly generated.[1]

The Plane of Air is ineligible to leave bones files. The entire level is no-teleport. 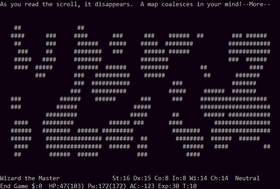 An example layout of the Plane of Air.

The level consists of open air, with multiple opaque moving clouds scattered throughout. You enter the level somewhere in the left side of the level, and the portal to the Plane of Fire is somewhere in the right side.

As always, the priority is locating and entering the portal to the next Plane. The two primary challenges to this end are controlling your movement across the level and surviving the monsters and lightning strikes.

Even if you are not levitating at will, some of the effects of levitation apply. If you throw objects or kick monsters, you will be propelled in the opposite direction, in accordance with Newton's third law. If you want to escape a situation quickly, you can propel yourself by throwing junk objects - although you will then be left helpless for a number of turns equal to the distance you moved.

If you don't have any sources levitation or flight, trying to move by struggling through the air will take far longer than any other method, making it much more likely that you will end up in the cloud banks at the wrong time. As indicated above, one way to travel without control of your movements is to throw objects in the opposite direction. This is reasonably expeditious, and may warrant carrying some light junk objects to the Planes if no other options are available.

Another option is to get engulfed by a whirly monster (e.g., a steam vortex if you have fire resistance) and let it ferry you around - however, do not get carried into the clouds! The clouds move across the level, and whirly monsters can move near or into them while you are inside them—the tougher air elementals in combination with an ill-fated lightning strike can make short work of even a well-prepared character. If you find yourself engulfed by a whirly monster intent on dragging you deep into the clouds, do your best to break out as soon as possible.

The monsters on this plane are fairly tough. The air elementals move much faster than even a very fast player and can dish out damage quickly; while a wand of slow monster or wand of opening will force them to expel you, the air elemental may likely re-engulf you before you can escape. They are also generated to be much tougher than the ones encountered in the dungeons; keep an eye on your HP and be prepared to expend some resources to escape and/or kill them when necessary. As mentioned above, they may also pull you close to or into the clouds, making escape paramount.

Air elementals are susceptible to various spells and wands, such as the sleep spell, death rays, teleportation beams, and so on. Polymorphing is also a valid strategy, but carries the usual risks of producing something worse.

As this plane has no normal floor, you cannot use Elbereth in emergency situations; the scroll of scare monster still works normally. Tooled horns and leather drums are also solid monster deterrents. You can also hide in the steam vortexes as mentioned previously - with fire resistance, they will do no damage and allow you to safely restore HP while engulfed, though the primary hazard then becomes the clouds and their aforementioned lightning strikes. Conflict is also viable to keep monsters occupied and away from you while you prioritize finding the portal.

As with the other elemental planes, you must locate the portal. It is stationary, but not immediately visible, so the usual methods work nicely. As the area the portal can be placed in is relatively small, it is easier than usual to find it with the Amulet. The moving clouds, however, limit the reliability of a wand of secret door detection.

In NetHack 3.4.3 and earlier versions, as well as variants based on them, the clouds do not move, and the layout is static:

The best path for most players is to either break through the cloud bank at the narrow point near the middle of the map, or go around it altogether at the top.

In UnNetHack, the escape portal can be located on either side of the Plane, even a few steps from your arrival point.