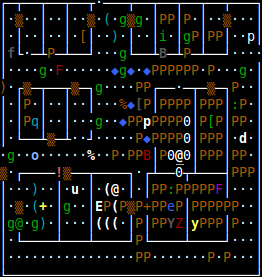 Example of a pudding farm in Minetown.

Pudding farming was a farming strategy prior to NetHack 3.6.0. It is no longer an effective strategy, as nearly all of its benefits have been eliminated.

The strategy involved finding a black pudding (or occasionally brown pudding) and dividing it repeatedly before killing any of the puddings. Players used to do this to generate large numbers of death drops and corpses (for sacrifice). Expert pudding farmers could actually fill entire levels with the divided puddings and obtain several hundred pages of items from the result. Some even automate the process. Farming is sometimes called "divide & conquer" or "divide & ascend" tactic.

Creating a large number of puddings does not in itself violate any conducts. Some activities related to pudding farming do, however:

Pudding farming is a slow process, especially at the start. The wielding of a weapon that deals any significant amount of damage tends to kill the puddings faster than they can divide, as divided puddings have half the HP of the original. Pudding farmers prefer weapons that deal low damage (or even non-weapon iron items) when splitting puddings. A weapon used in this manner is often named a "Puddingbane". A typical Puddingbane has its enchantment reduced to -3 from engraving and is thoroughly corroded by the black puddings themselves.

Critics decry the act as scumming because it allows one to (relatively) quickly obtain all of the possible benefits of sacrifices and causing items that were normally extremely rare to be common. For example, amulets of life saving could become as common as the player would like them to be.

Intention of the DevTeam?

Some in RGRN have requested that the DevTeam put some cap against the process of pudding farming. There are a few different ways that this might be done, e.g. the RGRN thread "Is NetHack too easy? (spoilers)" from January 2006. Ideas included having puddings become more powerful as you kill them, preventing cloned puddings from dropping corpses and items, and forcing pudding division to count for extinction.

Pudding farming is not a modern invention; this post from 1993 talks about farming brown puddings. In October 16, 2006, the Shrewd Dude posted a guide, How to Raise the Perfect Pudding. In 13 years, players have invented many strategies for more effective pudding farms, but they have also become bored. Jove stated in reply, "The DevTeam has arranged an automatic and savage punishment for pudding farming. It's called pudding farming."

In Nethack 3.6.0, the DevTeam made several changes which rendered pudding farming completely ineffective - puddings no longer drop corpses at all (and thus cannot drop items either), and cloned puddings give significantly fewer points.

Pudding farming in SLASH'EM is a lot less productive than in Vanilla, reducing its use and/or scumming ability greatly. First, the puddings will never drop items[2], so they can only be used for their corpses. Getting resistances, sacrifice gifts and prayer rewards is still a big help, however. Thus, brown puddings are actually a viable alternative to their black cousins, since they are considerably safer, and provide the same benefits. A brown pudding farm will require more puddings to provide these, however, since they do not always drop corpses and have a lower chance of granting intrinsics. Also note that your god will often send you minions: you must deal with those, or else have your entire crop of pudding killed (tip: put on a ring of aggravate monster and hit it with your Puddingbane until it untames). Thus, while it might be useful for sacrifice gifts and resistances, pudding farming is no longer potentially game-breaking, as it is in vanilla.

Remember that in SLASH'EM, corpses will sometimes be overgrown by molds, including lichens. So, after you've farmed all you want for resistances and sacrifice gifts, you may continue farming for a non-rotting food supply.

NetHack 4 does not restrict pudding farming, but tracks splitting puddings as an official conduct.