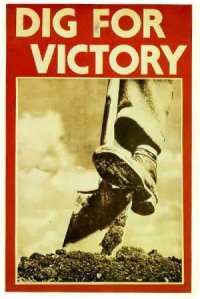 Digging for victory is a NetHack metastrategy in which the player aims to quickly reach the Castle and obtain its wand of wishing by digging down as soon as possible; the resulting game is called a "dig for victory". In addition to a digging instrument, the player needs a tonal musical instrument (not a leather drum, bell or whistle ) to open the castle drawbridge. Elven wizards and priests are guaranteed to start with an otherwise-rare instrument; the elven wizard is the more popular choice for this strategy, due not only to the starting instrument but to the large selection of other magical equipment with which they begin.

The dig for victory strategy is mostly preferred by players who find it an exciting way to reach the castle in a high percentage of newly begun games. However, many strong players do employ a controlled dive to the Castle if they do not yet have magic resistance or reflection after completing Minetown and Sokoban. This dive can take a variety of forms, from simply not exploring every dungeon level thoroughly to actually digging down all the way. A player making the dive after getting some protection, building up a set of armor, and collecting wands is much more likely to succeed. Reasons to do this include the avoidance of traps which are painless with magic resistance (especially polymorph traps, which can destroy armor, and teleportation traps and level teleportation traps) and being able to obtain relatively early immunity to the touch of death (for which some players would preferentially genocide master liches over arch-liches because the former is more likely to appear at the castle).

As of this commit, falling through a hole will inflict damage, expressed as an amount of d6 equal to the number of floors you fell - this means that you may end up digging a deep shaft and die from the landing, particularly if you are low in level and/or HP. Additionally, per this commit and its followup commit, neither master nor arch-liches can appear in the Castle.

A dig for victory usually starts with the player entering the Gnomish Mines and searching for a pick-axe, where such tools are plentiful. If the player did not start with an instrument, he or she will also usually look for one in the Mines (Minetown can have instruments in the hardware store). The player then returns to the main dungeon, and digs down until the castle.

Digging with the pick-axe requires multiple turns, so occasionally monsters will appear and halt the digging process. These must be scared off with Elbereth or otherwise dealt with. Worse, the player may encounter a minotaur (which ignores Elbereth) in a maze either just before or on the castle level.

Once at the castle, the drawbridge can be opened and closed at will by playing the passtune, crushing anything that stands on it, which will hopefully be everything. Once the castle is clear, the wand of wishing is available for the taking. Beware of the bad Luck from crushing peacefuls, even if you plan on using conflict. It can make your wishes fail or turn out cursed.

Alternately one can perform a controlled level teleport to reach the castle. This requires some form of teleport control (perhaps a starting ring as a wizard) and usually a cursed scroll of teleport, but occasionally a level teleport trap, if one can be located. The castle lies somewhere between floors 25-29, but if one can always guess too far (e.g. 30) to go to the Valley of the Dead and come into the Castle level through the back side. However, dealing with the monsters in the castle without the draw bridge and the trap doors in the back can make this difficult if you don't have a method to traverse the moat back to the front. In that case, it may be better to teleport to floor 25 and work from there.

The following items are extremely useful for a player who is attempting a dig for victory. Although they are not essential in the same way that the pick-axe or the musical instrument is essential, it would be fair to say that a player needs to accumulate at least a sizable fraction of these items to have any chance at success.

A wand of digging is a highly desirable escape item, because the direction of escape (i.e. down) coincides with the direction that one needs to travel. If the game contains a Big Room, then a wand of digging will in all likelihood be essential for further progress, since a pick-axe takes too many turns to dig through the floor, and one is likely to be overwhelmed by monsters in the interim. A wand of digging is also very helpful for evading really tough monsters (such as minotaurs) in the levels above the Castle.

It is highly recommended to establish a permanent Elbereth on the upstairs of the Castle level, and on a square within a knight's move of the drawbridge. The former will protect against the touch of death and destroy armor attacks of any higher level liches that teleport to meet you in the Castle. The latter will protect you from melee attacks from xorns and eels while you are opening and closing the drawbridge. Make sure the second Elbereth is exactly a knights move away from the drawbridge. If it is any closer, either the falling drawbridge will kill you or you will be in the direct line of fire of ranged attacks from within the castle. If it is any farther, you will not be able to control the drawbridge.

A noncursed scroll of earth will create a defensive fort of boulders around you, preventing most monsters from coming near or hitting you with ranged attacks. It also allows you to cordon off a section of the Castle moat from eels by pushing a boulder into a moat square, creating a square of dry land that eels cannot cross. In a pinch, it provides a way to cross the Castle moat if the drawbridge gets destroyed for some reason. If the Castle level contains a minotaur, the boulders can help block the minotaur from attacking you: minotaurs do not respect Elbereth, so this is one of the few ways to keep them at bay. However, xorns and giants can pass over boulders, so an additional defensive mechanism (such as Elbereth) is still needed.

Having a source of reflection or magic resistance contributes greatly to survival in the castle. Of course, the idea is to have both, but in most cases a character with both is better off employing a more cautious strategy than digging for victory. However, a character with neither reflection nor magic resistance is extremely vulnerable to soldiers carrying wands of death or other attack wands. Magic resistance can be obtained by starting as a Wizard. Reflection can be obtained either from the amulet of reflection in Sokoban or the shield of reflection in Perseus's statue. A character without reflection and magic resistance is advised to at least obtain invisibility or displacement to minimize the chances of getting hit by a death ray, although one needs to be aware that invisibility and displacement are of limited use in the long corridor leading to the wand of wishing, which contains a number of soldiers that cannot be killed at the drawbridge since there is a locked door in the way.

A wand of teleportation is useful both as an escape item and as a means of teleport threatening monsters away, especially on no-teleport levels. It is best to save this item for really dangerous monsters such as minotaurs or soldiers with a wand of death.

Polymorph control is highly recommended. Try quaffing from sinks on your way down and turn into a xorn - you can then phase directly into a turret, bypassing the battles at the drawbridge and the throne room.

What to do after getting the wand of wishing

In a normal game, the player has already explored most of the dungeon levels above the Castle, and has collected all of the useful items in the dungeon by the time they reach the Castle. Thus, under normal circumstances, players typically know what items they are missing from their ascension kit, and use the wand of wishing to wish for those items.

In a dig for victory, the player has not explored most of the dungeon levels above the castle, and will typically have far fewer useful items than usual at this point in the game. It is not advisable to wish for all of the missing items in an ascension kit, simply because there are too many missing items and not enough wishes. The best advice is to initially wish for only those items that are essential for immediate survival, and save the remaining wishes for later. Then go back up the dungeon and explore all the levels that were dug past on the way down, after collecting all the items in the dungeon, the player will have a much larger portion of their ascension kit than before, and the last few wishes from the wand of wishing can be used much more effectively without fear of duplicating already-generated items.

Common wishes in dig for victory games include some form of dragon scale mail (either gray or silver depending on whether one lacks magic resistance or reflection) and a bag of holding to make it easier to collect items on the way back up. Another popular choice is an artifact of some sort, since a dig for victory involves getting the wand of wishing earlier than usual: fewer artifacts are present, and the chance of successfully wishing for one is higher.

Characters who succeed in obtaining the wand of wishing are likely to be in a good position to enter the Quest, even if they entered the Castle level with a low experience level, because the killing of monsters at the drawbridge results in a large amount of experience.

Much like the protection racket, digging for victory is nice when it works. Unfortunately, low experience level, interference from monsters, lack of equipment, minotaurs, collapsing drawbridges and purple liches all conspire to make the fatality rate very high, leading to the strategy's nickname of "dying for victory". As such, it is really a metastrategy (a true strategy aims to maximize the survival chances of a particular character, not maximize the chance of at least one of many characters surviving), and even considered by some to be a form of scumming behavior.

Digging for victory is not a new strategy; however, the first mention of it by the name "dig for victory" was by SpeedEvil on May 19th, 2006 in #nethack of the Freenode IRC network (now Libera).