From NetHackWiki
(Redirected from Extinctionist)
Jump to navigation Jump to search

Extinction is the condition whereby a particular kind of monster can no longer be (normally) generated after 120 of its kind have been generated.

Extinctionism is the challenge to cause every possible monster in a game of NetHack to become extinct. Once a species has become extinct, there are very few ways to create new monsters of that species. There are some exceptions, however, such as the monster spell summon nasties.

Extinction is distinct from genocide, which must be deliberately invoked and has no exceptions.

A creature is extinct when 120 of its kind are generated. The creatures do not have to be killed to be extinct. Once extinct, a creature will never be randomly generated again.

For example, you can make a creature extinct simply by summoning, or reverse-genociding 120 of its kind (which can be expected to take approximately 24 cursed genocide scrolls, given that each scroll summons 4-6 individuals), with no requirement to kill the summoned creatures.

As exceptions to the normal rule, erinyes become extinct after three are generated, and Nazgul after nine are generated. Extinction of these species is more thorough; even methods that ignore or only partially respect it will not generate them.

To make a creature extinct, you must create it in a way that increments the "born" counter.

Mechanisms of monster creation can be classified in those that

Pudding and gremlin division does not increment the born counter but respects extinction. You cannot make puddings extinct by dividing them, but once they have been made extinct by other means, puddings will no longer divide.[2]

Actions that do not respect extinction

Monsters not subject to extinction

Because the most common methods of extinctionism rely on monster generation, unique monsters are ignored by some extinctionists. However, unstoning a statue of a monster will increase the monster count for purposes of extinction; as a result, even unique monsters can be made extinct in this sense. Also, monsters that leave corpses can be revived with the undead turning spell or a wand of undead turning and re-defeated, which also increases the born count.

You can only make a species extinct if you can make enough victims. So you have to generate monsters, find a corpse to revive and kill, or repeatedly stone one. Life-saved monsters will not increment the born and kill counters.

Keystone Kops do not become extinct even after 120 of each kind have been created.

Play styles for an extinctionist 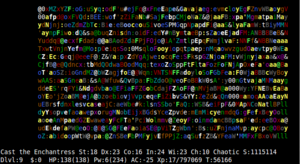 The easiest way to play an extinctionist is to play as a wizard. Wizards have the ability to cast create monster with no hunger penalty, and with the Eye of the Aethiopica they can cast virtually indefinitely. There is no reason another class couldn't do extinctionism; it would simply be more challenging.

An alternative to the Eye is confused throne looting. Once extinct, the typical throne room population is replaced by ordinary random monster creation. You can generate as many monsters as you like, for free, at any rate you like, without even breaking conducts. However, killing the monsters is slower due to confusion, so several strong pets might be a good plan. The drawback is pet kills will not generate death drops.

Most extinctionists play through the early- to mid-game as normal, then start working on eliminating monster species after becoming strong enough to do so safely. "Strong enough" in this case typically means obtaining the Eye, sporting a decent set of armor and a good weapon, and gathering up all the various resistances, including magic resistance, and reflection. It would be very bad to lose your character to a random gnome with a wand of death after hours of painstaking and tedious summoning.

A common method to rack up kills is to build a boulder fort around an altar. Then stand behind the altar and cast create monster over and over, while killing the resulting monsters and sacrificing them to your god.

You can either just summon monsters and kill them at random, or try to control your summoning.

This controlled summoning method could also be used from the beginning of the game, before acquiring the quest artifact and key resistances, although as noted above this method is somewhat more fraught with danger.