Farming is any kind of repetitive behavior which is felt to be against the spirit of the game. This definition does not tie down exactly what behaviors count as farming, as opinion varies. Most major forms of farming were addressed by the DevTeam in version 3.6.0, limiting the benefits that can be derived from them.

Methods that rely on splitting monsters will not work anymore if those are extincted, although the farming itself will not contribute to extinction.[1]

Hanging around an altar sacrificing anything that comes along is a natural part of many legitimate games of NetHack, but some feel that taking this to extremes is scumming.

Advancing your character to the point where black puddings pose no threat, then carefully using weak weapons to divide them without killing them allows players to "farm" as many puddings as they wish. The puddings can be killed to get a death dropped item, and their corpses can be sacrificed for a variety of benefits.

Players can continue this process (and even automate it) until they possess thousands of hit points, AC:-128, and hundreds of wands of wishing.

As of Nethack 3.6.0 the majority of the benefits of pudding farming have been eliminated. Puddings no longer drop corpses, and hence can no longer provide death drops or sacrifice material.

If you are playing as a Valkyrie, you can hang out on the home level of your quest and kill giants for strength gain and death drops. This can be done easily by waiting in the building with the Norn using the numeric prefix command and then venturing out to kill and consume a giant when you become hungry. 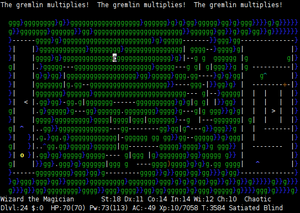 That's a lot of gremlins...

While gremlins normally stop dividing once their hit point maximum falls to 1, it's possible to induce them to divide indefinitely by using a ring of conflict. This works because whenever a monster kills something, such as another gremlin, its hit point maximum is increased, which allows it to divide again.[2] Since on average a gremlin gains more than one maximum hit point when it kills another gremlin, the result, provided that the gremlins are given enough time to heal and divide, is a net increase in the number of gremlins. As gremlin division does not respect extinction, this allows gremlins to be farmed somewhat like puddings.

In 3.4.3, gremlins fail to death drop most items due to their size, but they can drop gems, rings, and magic markers, among other loot. As of 3.6.0, cloned monsters (such as multiplied gremlins) cannot leave death drops at all[3], and give diminishing experience returns[4], but they can still be used for sacrificing.

To breed gremlins effectively, the following steps are advisable:

Prior to 3.6.0, throne farming was perhaps the fastest way in the game to generate lots of monsters, and the only method available without breaking any conducts.

#Looting a throne while confused will generate one throne room monster (if no chest is on the level). This does not take in-game time. You can generate an indefinite amount of monsters this way: the throne is never destroyed; a forgotten spell is an unlimited source of confusion; after throne monsters are extinct, ordinary random monsters are generated; and you even get your gold back from the monsters. Dragon scales, lots of potions and scrolls, and death drops can be had. You might want to engrave concentric circles of Elbereth this way and/or use a boulder fort to protect yourself from ranged attacks.

Illiterates can get a monster to read the scroll of earth, stand on a scroll of scare monster, and confuse themselves with a cursed unicorn horn if they have no expired spell. Polymorphing into a ghoul or applying a non-cursed unicorn horn can take care of sickness. The chance of death by sickness is under 2/10,000,000,000,000 if you immediately start applying a blessed horn until cured. Unattended copy-paste farming is only possible if you confuse yourself with an expired spell or are permanently a ghoul.

Setting menustyle=traditional in your config file can make the paste script execute the spellcasting faster.

Undiggable, non-teleport levels work best since monsters will not ruin your setup and use up only one charge from "your" wand of teleportation. Many quest leaders sit on a suitable throne - you can make them wander away if you move adjacent on a free turn, and next say no to "really attack?".

Throne farming no longer works indefinitely in 3.6.0. Creating a monster now has a 10% chance of marking the throne as looted, which will prevent the throne from creating any new monsters. Additionally, confused looting now consumes a turn.

Kraken can be killed trivially when on dry land, and their corpses can be revived using undead turning. This means you can continue killing the same monsters indefinitely, racking up a very high score with very little effort.

You can also trap kraken (which are MZ_HUGE, and so can't squeeze through a diagonal) by digging walls in the following pattern:

This allows a farmer to repeatedly cast undead turning and finger of death along the diagonals with copy and paste.

As of Nethack 3.6.0 this strategy is either impossible or vastly more dangerous, as krakens will no longer revive on land, and having them in water puts the player at risk of drowning.

Characters with a source of reflection or a mirror and the stone to flesh spell can easily stone and revive Medusa as many times as they like. No death drops are generated this way, but it does provide an easy source of experience points.

This trick has also been nerfed in NetHack 3.6.0, as repeatedly killing a revived monster eventually starts yielding diminishing XP rewards.

This is only borderline scumming, as any character capable of doing it is more than capable of ascending. The goal might be to gain large numbers of exotic items to ascend with, to gain billions of points, or (more commonly) to impress onlookers.

In this example, Death is trapped between blue jellies and a boulder. He cannot move, but you can hit him with a polearm while he is in line of sight. Once he's dead (in one hit), attempt to push the boulder over his corpse. This will revive him. You can then repeat the procedure. You can work out the exact sequence of key strokes used in a complete cycle of this process (in this case, for example, "aahy.jyk"), and copy this line a few thousand times in a text editor, then paste the whole lot into the NetHack interface.

The result will be many thousand death-dropped items and a very high score. If the number of death-dropped items exceeds 32,767 on the same square, the game will probably crash,[5] so periodically checking Death's square and redistributing the items (possibly by teleporting them away, or polymorphing them together) is necessary. This is because the number of items present on a square is stored in a signed short when the items are listed.

First, retrieve the Book of the Dead. This works best if you refrain from killing the Wizard, because then he won't randomly appear until you perform the Invocation Ritual. Reading the cursed Book can summon wraiths (as well as other undead, including liches, so genocide what you cannot deal with). However, it also marks the current level as a graveyard. This means that you should lead wraiths to another (nongraveyard) level before killing them for their corpses. Recall that eating a wraith corpse at experience level 30 will still increase your maximum HP and power.

Since werecreatures in their animal form can summon animals when attacking you, they can be used as a inexhaustible monster source. A reasonably safe farm is somewhat tedious to set up, but it can be a viable (and conduct-proof) alternative to the usual monster creation methods, since it has not yet been nerfed as of 3.6.1.

A farm made out of a closet

The main idea is to trap the werecreature in a locked space connected diagonally to a door. Since monsters cannot move diagonally through a doorway, but can attack, you can easily "switch" the monster creation process by moving in and out of the doorway. You can use an existing closet as the base -- simply dig a square to the side, trap the monster there, and block the original closet square with a boulder. If you have a wand of locking, you can construct the farm in pretty much any room (including near an altar).

Luring the werecreature into the trap can be troublesome. The easiest way is to temporarily tame it, but illiterates may find it difficult. Since werecreatures are not followers, moving them between levels without taming is also difficult. (You can get them to fall down holes, or kill them and undead turn their corpse.)

Once in place, you just need to endure its attacks. You will inevitably be infected by lycanthropy, so you need some way of managing it: either Werebane, an amulet of unchanging, or a ring of polymorph control (make sure to turn paranoid_confirmation:Were-change on if using the ring). It helps to have a means of curing it, as well (like prayer). Anyway, after a few turns of attacking you the monster will summon help, after which you should step aside and deal with them.

Summoned monsters can be used for most usual purposes (food, death drops, sacrifice, etc.) but note that being infected with lycanthropy makes eating them cannibalism and reduces the chance of a prayer boon, because your god will prioritize fixing the lycanthropy first. If you have Werebane, however, this is not a concern.

All three kinds of werecreatures can be used, but wererats summon rats which have poisonous attacks and rarely leave corpses, and werewolves can summon winter wolves whose rays of cold can cause unwanted destruction (like the death of the original werewolf). If you can deal with them, however, they can give cold resistance (but mind the cannibalism penalty). Wolves leave corpses very often but are tougher in general, making werejackals an optimal choice for low-level characters.

Overall, it's a tedious and somewhat situational strategy, but if you're sacrificing for a powerful artifact and have gotten Werebane instead, it can be considered.