The Astral Plane is the final level of NetHack. In order to win, you must bring the Amulet of Yendor to the high altar of your alignment and #offer it to your deity. High altars cannot be converted, but it is possible to fool the gods by wearing a helm of opposite alignment to match your alignment to that of the altar.

The Astral Plane is home to the three Riders—Death, Pestilence, and Famine—and to large numbers of aligned priests, Angels, and player monsters.

The player enters the Astral Plane from a magic portal on the Plane of Water and will come out at one of the two spots marked with @. Doors marked in red are locked. Each half of the lower hall has an independent 60% chance of being replaced with a room, as such:

The three altar rooms are temples containing the high altars, randomly assigned to lawful, neutral, and chaotic alignments (one of each), with an appropriately aligned peaceful high priest in each room. The three Riders are randomly assigned to the three round rooms, one to each. Also in each round room are four aligned priests and two Angels of Moloch. Each of the halls surrounding the temple rooms contains six priests and six Angels, two each of each alignment. The lower hall contains 4-9 hostile Angels of Moloch, and about half as many hostile random monsters. The level also contains three random D, three random L, three random V, and 3-6 random player monsters.

Upon arriving at the Astral Plane, you may be sent tame or hostile Angels. If you are generating conflict, your god will send one to four hostile Angels to fight you (and each other). If you are not generating conflict, and your alignment record is at least 9, your god will instead send a tame guardian Angel to assist you. This Angel will vanish and be replaced with the hostile ones if you later generate conflict in its presence.

Try to be satiated when entering the Astral Plane as protection against Famine - though it abuses dexterity, but that won't matter when you're going to ascend in a few minutes.

When you enter the Astral Plane, you may need to deal with the multitude of hostile Angels in the first variant. Additionally, any master or arch-liches will quickly teleport to your location, and if you were generating conflict on arrival there will be the additional conflict Angels. After this, you may have a few moments of quiet to plan your final moves. The Riders usually cannot get to your starting location immediately, but it is possible for them to make a beeline for the door and open it.

Identifying which Riders are in which rooms is important. Since the high altars are distributed at random, it is reasonable to start with the easiest target and go from there. A blessed potion of monster detection or the detect monsters spell cast at Skilled or Expert is best, but intrinsic telepathy will also do. Most players regard Pestilence as the most dangerous opponent, and Famine as the least, though your ranking may vary based on play style and equipment (e.g., Pestilence is vulnerable to death rays, while Death is not). The Riders are able to push monsters out of their way to get to you; killing them will buy you a few turns to get away from the corpse.

The Astral Plane's biggest danger is getting bogged down in the open, surrounded by opponents, while one or more of the Riders slowly push monsters aside and approach you. Thus, it is important to keep moving and avoid being surrounded. Opening doors quickly is important to keep moving. All doors start locked, and even at maximum strength they may resist multiple times. A wand of digging will always raze a door, allowing you to pass through diagonally, and will not be reflected by monsters in its path. Alternatively, a wand of opening or spell of knock will preserve the door, allowing you to lock it behind you to prevent most monsters from following you. The Riders can unlock a locked door, but are still restricted from moving diagonally, which can buy you a few turns.

Jumping is a very powerful technique, since it allows you to cross many empty spaces in a single turn. There are two main ways to retain very fast speed while jumping: either wear speed boots and cast the jumping spell, or wear jumping boots and use potions of speed or the haste self spell. Using the jumping spell will consume more of your magical power, but at expert skill it also allows you to make longer jumps. If you intend to do this, you should use the Candelabrum of Invocation or the light spell to illuminate your destination, since ordinary light sources will not reach expert jumping's maximum distance.

The wand of teleportation is extremely useful for clearing paths through the monsters on the Astral Plane, and multiple wands work especially in conjunction with jumping and fast or better speed. Many players try to save their teleport wands for this occasion - be careful not to hit any of the Riders or their corpses with the beam, as the Rider will very likely appear next to you.

If you have a helm of opposite alignment in inventory and are willing to change teams at the last moment, you have a 2⁄3 chance of ascending at the first altar you reach, and you are guaranteed to ascend at the second one. This effectively means you can pick any one temple or Rider and completely rule out the need to visit it. For neutral characters, a particular helm will either make you lawful or chaotic, even if you remove and put it back on multiple times. You could carry more than one helm if you have not predetermined their associated alignments to increase your odds of ascending at the first altar - be sure you are able to uncurse the helm, though.

High priests are identifiable once you have reached their altar. If you try to chat with them while carrying no gold, the two cross-aligned priests will "not be interested", but the co-aligned one will go through the usual donations routine (or give you "two bits for an ale", presumably just before you offer the Amulet and ascend to immortality). You can also use the near look command (:) while on top of the altar to determine which it is; this is most ideal for atheist conduct. In addition, note that adjacent monsters who respect sanctuary may flee if you are in the correct temple.

A creative strategy for thinning the hordes is to reverse genocide purple worms, tame them, then teleport them.

Most creatures on the Astral Plane (with the notable exception of the Riders) are vulnerable to stoning attacks. If you can save a wish this long, wishing for a "blessed partly eaten chickatrice corpse" will allow you to mow down most opponents. Reverse genocide is another option, and you can do it in the Plane of Water just before entering the portal.

Scrolls of earth will have no effect in the Astral plane. The only ways to obtain boulders are either wishing (one by one), or polymorphing statues repeatedly until they turn into boulders. Reverse genocided giants will not carry boulders, but giants created through a create monster effect can, if one has patience and no source of polymorph or wishing. Boulders can also be carried by a character polymorphed into a giant, and tame giants with boulders in their inventory can be brought onto the Astral Plane easily with a magic whistle (perhaps via taming the fire giants on the Plane of Fire). Boulders can then be used to keep monsters from entering the temples, or for Death farming.

The priests are likely to use the summon insects spell on you. Like in the Sanctum, you can use this to your advantage—the relatively harmless ants and beetles can shield you from the more dangerous priests and Angels. This will only partially shield you from the Riders.

If you have the ability to cast spells, remember that the Amulet of Yendor will drain more power from you than normal. Dropping the Amulet to the ground before spellcasting preserves power at the cost of time spent dropping and picking it up. The magic missile spell is very powerful at high experience levels, especially if you are a Knight and are carrying the Magic Mirror of Merlin. Typically only Angels will resist magic missiles, and even the Riders will succumb quickly to a few casts. It takes less energy to make three missile attacks than to cast a single finger of death.

Good rings to wear on the Astral Plane are free action and conflict. Wearing the ring of conflict will cause hostile angels to spawn around you instead of a tame one; however, they are usually avoidable, since they will often fight each other instead of you.

Above all, pay attention! It is easy to get distracted by all the tumult and not notice, say, that Pestilence has made you sick and there is a timer running on your life. You still have as much time between turns as you need, inventory is still a "free" action, and so forth. Don't get so excited that you lose your cool. 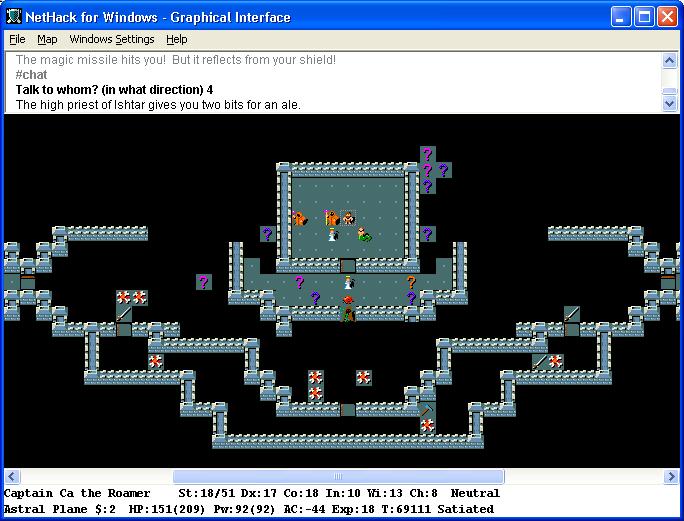 A touching gesture from the High Priest of Ishtar as a Caveman prepares for immortality.

Wikipedia has an article about:
Astral plane

The astral plane, also called the "astral realm" or the "astral world", is a plane of existence postulated by various philosophies and religions. The term was popularized in the late 19th and early 20th century.

It is often believed to be the world of the celestial spheres, crossed by the soul in its astral body on the way to being born and after death; another view holds that it is the entirety of spirit existence or spirit worlds where all consciousness resides, where those on Earth go when they die. It is generally populated by angels, spirits or other immaterial beings.

In SLASH'EM, the Riders do not have the ability to displace other monsters, so it is possible to shield yourself from them by letting weaker enemies surround you or deliberately placing sessile monsters at choke points.

Unicorn horns must be enchanted to work reliably, so make sure to bring a highly enchanted unicorn horn to deal reliably with Pestilence's sickening attack.

Because SLASH'EM introduces some powerful insects, the summon insects spell is much more annoying. Planning to cut through the insects with your melee weapon is not very practical. Make sure to bring enough wands of teleportation.

In xNetHack, the Astral Plane is fully lit, eliminating the need to use a light source for jumping. Also, the random V and L are replaced with random A, so the player is much more likely to be faced with one or more Archons.