From NetHackWiki
(Redirected from Experience)
Jump to navigation Jump to search

Your experience level in NetHack is a measure of the overall power of your hero and progress of your adventure. You start at level 1, and can level up to 30 at the highest. As you gain experience, you become better at both fighting and magic, but more difficult monsters are generated.

Experience points (XP) are the units that you accumulate to increase your level. Depending on the showexp option, you may see a display of your XP or only see your current experience level.

Gaining an experience level has a number of effects on gameplay:

There are several ways to gain an experience level, ranging from obvious to somewhat obscure:

You may never gain more than one experience level at a time; killing a water demon at XP1:0 will only put you on 2:39, not 4:148 as might be expected. (You can, however, gain multiple experience levels in a single turn, as for example when a beginner character manages to destroy many creatures at once with an exploding gas spore.)

If you are already at level 30, experience points will not raise your level. Except for polymorph, effects which instantly increase your level can still increase maximum HP and energy at level 30.

The following effects can decrease your experience level:

Drain resistance protects against all these except polymorph.

Having a level drained puts you a single experience point below the threshold of the level you just lost.[1] If you gain any experience at all, you will regain a lost level, but only one level can be restored in this way. A noncursed potion of restore ability or blessed potion of full healing can be used to restore multiple levels. Full healing is inferior to restore ability, because it will only restore up to half of the levels that were lost. Regardless, care should be taken when fighting level drainers, particularly in graveyards where there are many around.

When losing a level, your HP and maximum HP are both decreased down to the level they were when you attained that earlier level, to a minimum of one. Energy and maximum energy work similarly, down to a minimum of zero.[2] Being drained below experience level one is deadly, although an amulet of life saving can rescue you, leaving you at level one with no experience.[3]

There are several uses for intentionally lowering your level; these are typically referred to as "drain for gain". Watch out for outdated strategy advice regarding this, though; several drain-for-gain exploits were removed in NetHack 3.6.

Several variants alter the experience requirements to reach each level; these are included in the tables below. (xNetHack and SpliceHack-Rewrite use the FIQHack column.)

The following graphs show the amount of XP required for each level in vanilla, SLASH'EM, dNetHack, EvilHack, and FIQHack (xNetHack and SpliceHack-Rewrite use the same graph). 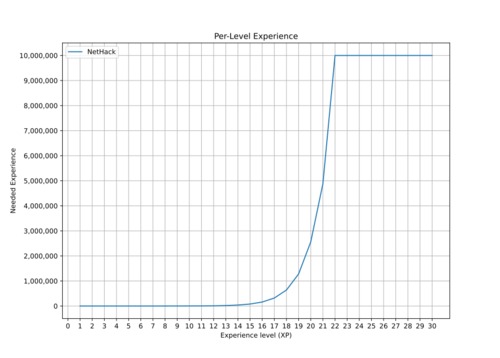 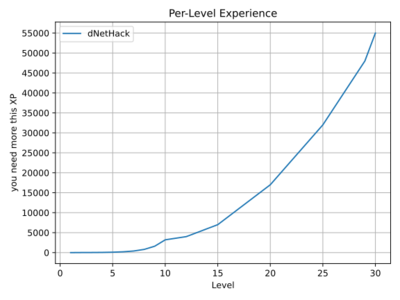 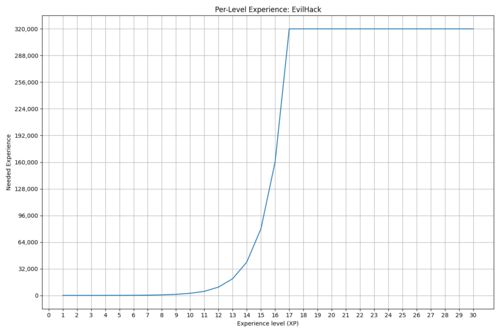 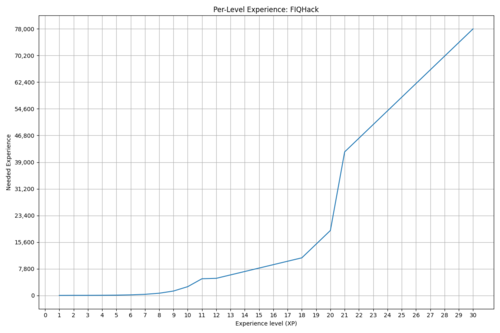 Every character must reach level 14 at some point to complete their Quest and retrieve the Bell of Opening, required for the Invocation ritual. In general, levels beyond 14 only provide a real power boost for characters who are heavily into spellcasting. Other characters get more HP and to-hit chance, but alchemy, nurse dancing, Luck, and enchanting your weapon can substitute for these boosts. The minor gains from higher levels should be weighed against the more powerful monsters that a high-level character will face.

You can bypass the Quest level requirement by killing your Quest Leader, but this comes with severe penalties. It's only recommended for speed runners or characters who have locked themselves out of the Quest, not for those who simply don't want to level up.

Getting zapped with the drain life spell or a wand of draining drains an experience level. Using draw blood to make a potion of vampire blood also drains a level, but you are put at the minimum experience for the new level; killing a monster won't get the level back.

In SLASH'EM, a character usually gains enough experience to reach XL 30 naturally without farming. This advantage is slightly balanced by the higher experience requirement at low levels; most early characters will be about one level lower than their vanilla counterparts.

In UnNetHack, Monks receive the message "Punardarsanaya level <x>" when losing a level.

In FIQHack, the EXP formula was replaced and it is generally much easier to gain new levels after level 10.

Level-draining melee attacks are no longer blocked by MC, each successful attack will drain a full level.

While you are level drained, experience gain is boosted significantly. Quaffing a blessed potion of full healing will restore all lost levels, not just half.

In EvilHack, it's still an exponential growth curve like vanilla, but the curve ends sooner (level 17 instead of 22), and the experience needed to progress is much less (320,000 per level instead of 10,000,000 per level). The logic being, the player can reasonably/realistically reach the maximum experience level from killing monsters only, without it being too easy to do so.