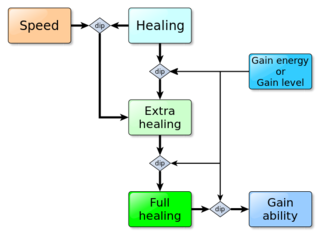 By combining different potions appropriately, common potions of speed, healing and extra healing can be converted to the much more useful full healing and gain ability.

In NetHack, alchemy is the process of dipping one potion into another potion to mix the two into a new uncursed, diluted potion. For those who are not spoiled, alchemy is difficult to learn - there is no in-game indication of which potions are meant to be compatible with each other. While mixing potions at random is generally dangerous and unwise, there are a set of recipes that can be used to produce fairly consistent results.

Despite its name, the alchemy smock has no effect on alchemy.

The mixtype function describes the alchemy recipes and governs which mixtures of potions produce certain results, as well as how often. Any potion made via alchemy will always be diluted, regardless of whether the input potions were; for recipes, the order of the potions involved does not matter.

The following actions do not constitute alchemy:

Dipping a potion of acid or a cursed potion into any other potion, or else 1⁄10 of the time when mixing any other potions, will result in an alchemic blast: The mixture explodes, dealing d10 damage, abusing strength and generating vapors from the potion that was being.[1] This does not occur if you dip into a cursed potion, however.

If an alchemy attempt results in an explosion, only the number of potions actually being dipped will be used up, as opposed to the entire stack.

Mixing a pair of non-acidic potions that does not have a recipe (all of which are helpfully listed below) will give a random result:

Dipping one set of stackable potions into another will alchemize multiple potions in the stack being dipped, while consuming only one potion of the one being dipped into:

As such, some players tend to wait until they have a stack of at least eight potions to dip before performing alchemy, to get the greatest return out of the dipped-into potion; this includes identifying their beatitude and accounting for any diluted potions. Make sure to examine your potions between each dip, to avoid accidentally turning a diluted potion into water; splitting stacks to avoid accidents is unnecessary due to how dipped stacks of potions are treated (as described above).

There are multiple methods to dilute potions: You can dip them into a fountain, or simply dip them in a moat while flying or wearing water walking boots. If neither are available, you can also drop your iron items, scrolls, spellbooks, and other potions, then walk into water - make sure your encumbrance is less than Stressed and that your Luck is not too high, as this reduces the chances of potions diluting.

Below is a set of tables with a listed pair of ingredient potions and the result that mixing them produces; multiple recipes can yield the same result. Knowing the identity of the potions you are mixing is necessary regardless of which recipes you are attempting; it is also common to informally identify potions by using the output from these recipes.

These recipes have the greatest likelihood of succeeding (9⁄10, with a 1⁄10 chance of explosion):

The other recipes are usually not as useful to produce via alchemy:

These recipes do not always produce the same result:

The potion of enlightenment formula is almost never worth attempting because the probability of success is so low. Potions of gain level are much more worthwhile in comparison due to their multitude of uses, including making full healing potions, and the chance of success is higher than with enlightenment.

It is possible to use the above recipes in tandem with each other, provided you are careful about the use of diluted potions.

One example is making blessed potions of full healing and gain ability from all those healing and extra healing potions you've collected. You will need to re-stack your potions at all intermediate stages: bless stacks so all will have the same identified BUC status, and dilute concentrated potions so they will stack with the newly-alchemized ones. Follow the route:

Only the first step can be done using a potion of speed; the rest need gain energy or gain level (see image at the beginning of the page). Leave over enough full healing, and bless all the end results.

In NetHack 3.4.3 and earlier versions, including some variants derived from these versions, alchemy always acts on the entire stack.

In NetHack 3.6.0, alchemizing a stack works differently from 3.4.3 and from later versions of vanilla NetHack:

A very complicated recipe is used in 3.4.3 for making lots of potions of gain level:

In 3.4.3, this recipe uses up an expected 23.67 potions, including all the trackbacks and alchemic explosions; to conserve resources, you can dip the water into otherwise useless potion of acid, and use a unicorn horn or cancellation spell to convert sickness to juice rather than a wand of cancellation; 3.6.1 makes this recipe much less profitable. Firstly, producing sickness through random alchemy incurs a 50% chance per dip of the entire water stack disappearing, which makes it significantly more risky (and costly on average). Secondly, both confusion and enlightenment are magical potions, so making them in decent amounts under the new stacking rules is significantly harder. Assuming a large potion supply (at least 8 for each dip) and accounting both for dipped-in enlightenment and byproduct booze, each potion of enlightenment on average requires 5.1 potions of booze and 1.9 potions of gain level or gain energy to make, which actually makes using gain level counterproductive. In a more realistic scenario of limited potion supply, you have a very real possibility of using up all of your gain energy potions and ending up with fewer enlightenment potions than your initial supply.

In SLASH'EM, dipping into a cursed potion will cause an explosion.

Dipping a potion of water into another potion is the same as dipping that potion into water; thus it is not possible to use potions of water in random alchemy, as it will always dilute the other potion rather than creating a random alchemic result. This can be circumvented by taking the potions of water and dipping them into the castle moat, turning them into potions of amnesia. These potions can then be used for random alchemy, but the vapors caused by an explosion will cause you to forget spells, items and levels, unless you are polymorphed into a form that is eyeless and have breathlessness from any source, including your polymorphed form.

The Color Alchemy Patch, notably incorporated in UnNetHack 3.5.2, changes the rules of alchemy to be based on artistic color mapping. It makes use of the primary colors red, blue and yellow, the secondary colors orange, green and purple, and the tertiary color brown, as well as black and white. All primary, secondary, and tertiary colors have a light and dark variant:

Mixing potions together gets the following results:

Mixing two light potions will create the light version of the result, and the same goes with dark. Mixing a light and a dark potion will create either result at random unless one of the original potions is diluted, in which case the result will have the same light/dark level as the undiluted potion.

These potions are considered colorless:

Because there are 12 more possible potion colors than types of potions in the game, some colors will probably not exist, rendering some formulas unavailable for certain games.

If the desired color is not a color used in the game, both potions will be wasted. For example, if you mix an orange potion with an emerald potion, but brown potions are not used in your game, then you will both potions disappear, leaving you with nothing: "The mixture glows brightly and evaporates."

Finally, a potion of polymorph, regardless of its color, will simply polymorph anything it is mixed with.

Potions of blood and vampire blood, introduced in SLASH'EM and UnNetHack, are also subject to alchemy:

In UnNetHack, these are the only potion-mixing recipes outside of the color alchemy system.

In SLASH'EM and dNetHack, dipping a valuable gem into a potion of acid will generate another type of potion. The potion you get is defined by its randomized description, not by its identified description. For example, if you dip a ruby into acid, you will always get a ruby potion whether ruby potions are full healing or hallucination in your game.

There's a chance that dipping will cause an explosion, using up the potion and gem and dealing some damage. If the potion of acid is cursed, it always explodes, like with normal alchemy. You will need one potion of acid per potion produced; stacks of gems will be melted one gem at a time.