This article is about the variant. For diabolical feature ideas, see Evil Patch Idea.

EvilHack is a variant initially based on NetHack 3.6.2, created by Keith Simpson (also known as User:K2). Work began on October 20th 2018, and was released for public play in April of 2019 on the Hardfought public NetHack servers. The Github repository for EvilHack can be found at https://github.com/k21971/EvilHack; a direct link to the change log can be found here, and is updated on a regular basis. The latest build of EvilHack incorporates the official release build of NetHack 3.6.6 (EvilHack version 0.4.2, last build Mon Mar 9 03:20:20 2020 UTC - git commit 0fa5e4d).

EvilHack was designed from the outset to be a much more difficult game to win than vanilla NetHack. The inspiration for this game mainly comes from the variants GruntHack and SporkHack, incorporating many of the same features that make those variants difficult in their own right. Some of those features have remained the same (for example, SporkHack's reflection changes), but many have been altered to set them apart and provide the player with a new experience. Elements from other variants have been included as well, such as from Slash'EM, SpliceHack, UnNetHack, and xNetHack. There is also a significant amount of custom content that has been developed that is not found in any other variant. In the near future, much more custom content will be added, mainly in the way of optional branch quests.

It is not impossible to ascend EvilHack (there have been a handful of ascensions already as of this writing, see this page at the NetHack Scoreboard for a listing), but there are several aspects of this game that the player might take for granted from vanilla NetHack that can easily end a promising run. In general, monsters are tougher and have more hit points, they can fight more intelligently, and they can and will use a variety of items and spells against you that previously only the player could use. Players that lean heavily on using Elbereth will need to re-think their strategy, especially during the early game. Some improvements have been made for the player as well, so there is an attempt at balancing game play, but overall, this variant will be a significant challenge for even the seasoned player.

From the variant author – a special thank you to community members Tangles, aosdict, AntiGulp, NCommander, jonadab, Demo, hothraxxa, jt, elenmirie, raisse, Grasshopper, ShivanHunter, Ogomt, various members of the DevTeam, and everyone else who play tested and provided invaluable feedback and code fixes. EvilHack would not have progressed as far as it has without their help and constructive criticism. 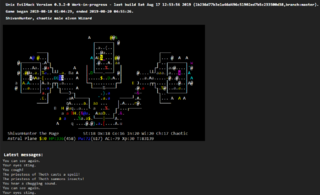 Below is a quick list of the more obvious or significant changes in EvilHack compared to vanilla NetHack:

There are many more changes as well, but the above list will give you a good idea as to what to expect. More in-depth descriptions of various facets of EvilHack can be found below (and will probably be a work-in-progress for quite some time).

Combinations are marked with either an L, N or C denoting a playable alignment. Any blank field means that race–role combination is not allowed.

Many alignment combinations have been unlocked as well vs vanilla NetHack, allowing for some race–role combinations you normally wouldn't expect to see (a neutral Dwarvish Healer for instance, or a chaotic Elven Knight, etc).

EvilHack adds one new playable role: the Convict. One or two more roles may be added at a later date.

EvilHack adds four new playable races to the game: centaur, giant, hobbit, and illithid. Each have their own strengths and weaknesses:

EvilHack adds a variety of new artifacts, weapons, armor and other usable objects, as well as some edits to a few existing objects. The vast majority of these objects take advantage of the object materials code incorporated from xNetHack, and have the potential to be generated made of a material other than its standard base material. The exception to this rule are artifacts – their material type is hard-coded and cannot be altered, even via a wish.

The object materials patch exists in several variants – the code used for EvilHack was taken from xNetHack and then modified. An objects material affects its weight, its cost in a shop, how much protection it can grant as armor or damage it delivers as a weapon, and what types of damage and decay it's subject to (if any). Certain monsters are adverse to various material types, and spellcasting failure percentage can also be affected. Some materials can affect your magic cancellation rating too. When items are wished for, their material type can also be chosen if its allowed for that type. Artifacts are the exception, as are a few other items.

Not all objects can randomly generate as any material. There are rules in place that determine the probability of what type of material an object will generate with. You can also use the tables below to determine what material you can wish for based on the object (e.g. wishing for dragonhide plate mail won't work, since plate mail base material is iron or metal).

Default base type iron or metal:

Armor and weapons of elven make (except cloth items):

Armor and weapons of orcish make (minus cloth items):

The table below lists all available magical properties, what items they can be applied to, and what their function is.

This bit was taken from SporkHack and then heavily modified – all DSM has a secondary extrinsic effect when worn.

What's new for EvilHack that you won't find elsewhere, is that the dragons these scales come from enjoy many of the same secondary extrinsics. Blue dragons are faster, red dragons hit harder, hitting a black dragon has a small chance of disintegrating the weapon you hit it with, etc.

Probably one of the most under-utilized pieces of body armor around – decent AC and no material spellcasting penalties, but its so heavy, wizard-types will steer clear of it even if DSM isn't available. I've attempted to address these shortcoming in EvilHack, giving it much more utility and hopefully making it into a viable choice for spellcasters other than the standard DSM.

Back story: crystal plate mail is forged from dilithium crystal, and can only be made by the most skilled of blacksmiths in conjunction with a powerful wizard. Dilithium is virtually transparent to magic; it almost acts like it doesn't exist. To some, this may seem like a bad thing, but for others it's a blessing.

A few new weapons were added to either flesh out a monster type, or to serve as a base for an artifact weapon.

An assortment of new spells have been added to EvilHack, both from GruntHack and SporkHack.

Several stock player spells have also had their levels altered to something that (to the variant author) makes sense:

Spellbook weights are now based on their level, the logic being the higher level the spell, the more pages needed to hold the formula. Level 4 spellbooks weigh the same as vanilla spellbooks; lower level weight less, higher level books weigh more.

EvilHack introduces several new monsters – some pulled in from other variants, others are custom creations not found in any other variant. Several stock monsters have also been changed to varying degrees.

This section lists all of the new monsters introduced in EvilHack, and is just a brief overview of each monster and any outstanding abilities or features each has. The order listed here is the same order as these monsters appear in src/monst.c.

A few new monster spells have been added to EvilHack, and some existing spells have been tweaked or changed. The order listed here is the same as they are listed in src/mcastu.c, typically strongest to weakest.

The monster spell cure self has not been altered, but some logic was introduced that makes this spell a priority if the spellcasting monsters hit points drop to a life-threatening level.