A trident is a kind of weapon that appears in NetHack. It is made of iron.

If you eat a trident while while polymorphed into a metallivore, you get YAFM and exercise wisdom.[2]

Tridents are one of the rarer weapons in the game, making up only about 0.8% of all randomly generated weapons.

Tridents are the only weapon to use the trident skill. There are no artifact tridents.

Though tridents are not typically sought out as a primary weapon, they are a popular choice of secondary weapon for twoweaponing that is comparable to sabers, crysknives and katanas; they are the most damaging weapon against large monsters that can be used in the off-hand, and average one more point of damage against them compared to a katana However, their rarity means that players usually obtain another viable off-hand weapon before encountering a trident.

Wikipedia has an article about:
Trident 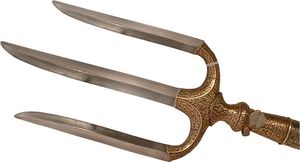 Tridents have origins dating back to ancient Greece and Rome, and have been used for both fishing and combat historically and in modern times; in warfare, tridents were favored for their long reach and ability to disarm and dismount horse-riding combatants. A trident is the divine instrument of the Greek god Poseidon, as indicated by the encyclopedia entry - this can explain the to-hit bonus against sea monsters and swimmers, as does its uses in fishing. The trident also sees use often in heraldry and military emblems.

The word "trident" originates from the Latin tridentis (lit. "three teeth"), referring to its trio of smooth tines: tridents designed primarily for fishing usually have barbed tines. This is part of the basis for the 3 dice used to calculate damage versus large monsters; the trident is also explicitly noted as a "spearish" weapon by the code, hence its position in the list of objects and its hitdie versus small monsters.[5]

In Dungeons & Dragons, tridents deal 1d8 base damage versus opponents, but have a lower critical hit multiplier than the long spear, which has the same hitdie. This results in tridents having lower average damage, though tridents also allow the use of a shield or an off-hand weapon.

That was pure chewing satisfaction!
You ate a trident while in the form of a metallivore.
Four out of five dentists agree.
As above, while hallucinating.

In SlashTHEM, Poseidon's Treasure is an artifact trident that acts as the Diver's first sacrifice gift.

In EvilHack, Infidels can unlock and train the trident skill to Expert if they are crowned. EvilHack also adds Angelslayer, an unaligned artifact trident.

Poseido(o)n, lord of the seas and father of rivers and fountains, was the son of Chronos and Rhea, brother of Zeus, Hades, Hera, Hestia and Demeter. His rank of ruler of the waves he received by lot at the Council Meeting of the Gods, at which Zeus took the upper world for himself and gave dominion over the lower world to Hades.
Poseidon is associated in many ways with horses and thus is the god of horses. He taught men how to ride and manage the animal he invented and is looked upon as the originator and guardian deity of horse races.
His symbol is the familiar trident or three-pronged spear with which he can split rocks, cause or quell storms, and shake the earth, a power which makes him the god of earthquakes as well. Physically, he is shown as a strong and powerful ruler, every inch a king.

[ The Encyclopedia of Myths and Legends of All Nations,
by Herbert Robinson and Knox Wilson ]