A war hammer is a type of one-handed weapon that appears in NetHack. It is the base item for the artifact weapons Mjollnir and Ogresmasher.

War hammers make up about 1.5% of randomly generated weapons (on the floor, as death drops, or in shops).

Player monster valkyries on the Astral Plane have a 50% chance for their initial weapon to be changed to a war hammer - this warhammer has a 50% chance of being made into either Mjollnir or Ogresmasher if either weapon has not yet been generated.[1][2]

The war hammer is the only weapon to use the hammer skill in vanilla NetHack. (The lucern hammer is a type of polearm, not a hammer.)

The war hammer is generally an unremarkable weapon, with lower damage than the mace and the long sword. As a weapon skill, it is most relevant for those who find or receive Ogresmasher and Mjollnir.

The lucern hammer, which existed since NetHack 1.3d, was erroneously classified as using the hammer skill rather than polearm skill - a mistake that was carried over from Dungeons & Dragons. In NetHack 3.0.0, this led to Thunderfist (the predecessor of Mjollnir) and Ogresmasher having the base item of a lucern hammer instead; the war hammer was introduced in part to correct this mistake a few versions later.

Wikipedia has an article about:
War hammer 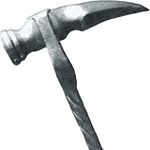 A horseman's pick, an example of a real-world type of war hammer

The war hammer is a weapon that was formerly used in warfare, dating back to as far as the 2nd century BCE; its hit die are derived from Advanced Dungeons & Dragons.

Real-world war hammers were quite versatile weapons and, much like maces, were important for facing heavily-armored opponents. The blunt hammerhead would deliver concussive force through thick armor - including most chain mail and even plate mail - and the pick end on the opposite face could be used to punch holes, whether through a piece of armor or the odd skull. They could also be used in grappling.

SLASH'EM adds a heavy hammer, a weapon that uses the hammer skill and is the new base item for Mjollnir.

In xNetHack, war hammers are made into a two-handed weapon that deals 2d6 damage to small creatures and 2d8 to large creatures.

They had come together at the ford of the Trident while the battle crashed around them, Robert with his warhammer and his great antlered helm, the Targaryen prince armored all in black. On his breastplate was the three-headed dragon of his House, wrought all in rubies that flashed like fire in the sunlight. The waters of the Trident ran red around the hooves of their destriers as they circled and clashed, again and again, until at last a crushing blow from Robert's hammer stove in the dragon and the chest behind it. When Ned had finally come on the scene, Rhaegar lay dead in the stream, while men of both armies scrambled in the swirling waters for rubies knocked free of his armor.