This article is about the property that alerts you to a hostile monster's presence. For the 'warning' that allows you to sense specific monsters, see warned of monster type.

Warning is a property that appears in NetHack and reveals the location of nearby hostile monsters that you cannot see. 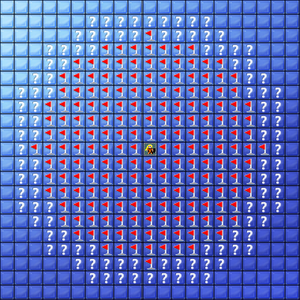 While you possess warning, hostile monsters that are within a ten-tile radius and are at least level 4 will have their location marked with a number from 1 to 5 (1, 2, 3, 4, 5) - in graphical user interfaces using the default tileset, such as the Windows client nethackw, the numbers are replaced with colored question marks that correspond to the above numbers (

The number used to represent a monster is 1⁄4 of that monster's level - the result is rounded down to the nearest whole, and will go no higher than 5, while 0 is not displayed. The glyphs displayed are described as an "unknown creature causing you <feeling>", where <feeling> is one of concern, anxiety, disquiet, alarm, or dread for warning levels one to five respectively. Warning levels will be chosen at random if you are hallucinating.

Moving near a hiding monster such as a piercer or trapper while possessing warning will cause you to take a second look close by, revealing the monster. Additionally, warning produces messages to alert you when you are standing on ice that is going to melt in under 15 turns.

Note that moving with m while blind will still attack in some cases, possibly petrifying you - this is very likely a bug.

Warning is a useful property to pair with other means of detecting hostile monsters, such as extrinsic telepathy - though it does not reveal their identity, it functions regardless of whether the monster is mindless or not, allowing it to cover "gaps" in telepathy.

The following table lists which mindless monsters each warning may represent, assuming that the player already has extrinsic telepathy. As a result of this, the warning can vary - e.g., an ochre jelly can merit a warning number 1 or 2, depending on the dungeon level and your experience level at the time of its generation. Monsters may also shift warning levels after generation through growing up, e.g. via conflict or quaffing a potion of gain level.

While not implemented, there is code to handle warning of monsters with a level below four - these would be represented by a 0 and described as causing you "worry".

Warning has been present in NetHack since the first public release of Hack included the ring of warning; the current warning system was first implemented in NetHack 3.3.1.

In prior versions, warning displayed messages when a hostile monster was nearby,[3] and a ring of warning would flash a single color corresponding to the warning numbers in modern versions - pink corresponds to "1", red to "2", ruby to "3", purple to "4", and black to "5". Messages that were higher in the list took precedence over lower ones. When blinded, no warning messages were displayed; while hallucinating, they are referred to as "mood rings", and the colors were replaced with hallucinatory ones.

No warning messages were displayed if one had been displayed within your last ten actions, unless the new message reflected a higher level of warning than the previous one.

The Palantir of Westernesse, the Elf quest artifact, conferred warning when carried from NetHack 3.1.0 to NetHack 3.3.0; the role and its artifact were made defunct in 3.3.1.

Your left/right ring glows <color>!"
You are wearing a ring of warning.
Your rings both glow <color>!
You are wearing two rings of warning.
You feel apprehensive as you sense a <color> flash.
You have intrinsic warning, or warning from an artifact.
Your spider-sense is tingling...
As above while hallucinating; this is a Spider-Man reference.

The Iron Ball of Liberation is the Convict quest artifact in most implementations of the patch, and grants warning when carried.

In SLASH'EM, The Candle of Eternal Flame and The Storm Whistle are additional artifacts that grant warning. The defunct artifacts The One Ring and The Pick of Flandal Steelskin also granted warning when carried.

In SlashTHEM, some roles can obtain warning through leveling up - the Zookeeper role starts with warning, the Officer role gains the property at XL 10, and the Ninja and Geek roles gain it at XL 15. Several other artifacts also confer warning as well:

In dNetHack, the Android and the Madman role gain warning at experience level 15. The Binder spirit Huginn and Muninn passively grants warning.

The Palantir of Westernesse is reintroduced in the Elvish Racial Quest as an artifact source of warning. Other artifacts also grant warning: Grayswandir, The Black Crystal and The Rogue Gear-spirits while carried, The Hat of the Archmagi while worn, and Helping Hand while wielded.

Great Cthulhu is a monster that can be sensed within standard warning distance as "an unknown monster causing you dread", regardless of whether or not you possess the property.

The beholder is hard-coded to always show up as 5 when detected via warning, regardless of its level.

In The November NetHack Tournament, the Really Cool Shirt grants warning when carried.