From NetHackWiki
(Redirected from Weapons)
Jump to navigation Jump to search

A weapon is an item used to attack opponents. Most weapons are wielded with w and used to hit enemies; to attack with a wielded weapon, simply try to move into a monster's space, or use Shift + F to attack in any direction. Launchers are wielded to shoot missiles, and some weapons are simply thrown.

The player can ready a second weapon for use; press x to exchange between your primary and secondary weapons. Some roles can wield both weapons at once using the #twoweapon command.

w- is the command to wield nothing and fight empty-handed. This is the default and ethical preference of Monks. It is also a preferred way to attack weapon-hazardous monsters such as acid blobs or rust monsters before you have a resistant weapon (e.g. a silver weapon or unicorn horn).

You cannot wield a weapon if you are handless or tiny.[1]

A weapon can be made erodeproof by wielding it as a primary weapon and reading a scroll of enchant weapon while confused. Erosion can be repaired by using a scroll to make the weapon erodeproof, or in some cases by dipping the weapon in a potion of oil. There is little reason to erodeproof wooden weapons, because weapons can only be made to burn in very unusual circumstances.

Table of weapons and their properties

(‰) Relative probability.[2] Figures are given as probability in a thousand, or permille.

(†) Objects are significantly more common in play than their probability would otherwise imply due to monster starting inventory or certain traps.

(1) When the user is riding, the lance gets an additional 2d10 in case of a successful joust. The victim is also automatically stunned and thrown back a square. 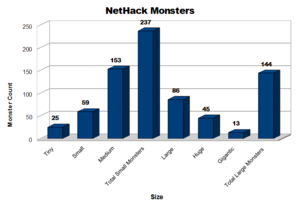 Medium monsters include the four Riders, the majority of monsters on the Astral Plane, the Wizard of Yendor, and the high priest of Moloch. However, the demon princes in Gehennom may pose a serious threat to the player, and are all classed as large, with the exception of the dangerous but rarely-seen Dispater.

A weapon is a device for making your enemy change his mind.