From NetHackWiki
(Redirected from UnNethack)
Jump to navigation Jump to search 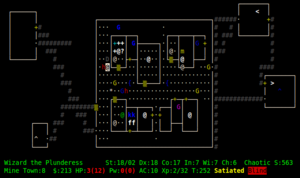 UnNetHack 5 is a variant of NetHack 3.4.3, maintained by Patric Mueller and others.

The main intent of this fork is to put more randomness, challenges, and fun into NetHack.

It features more levels, several UI improvements designed to reduce tedium, and many gameplay-related changes.[1] Since 3.6.1 it also bundles a graphical tiles UI for Windows. The 5.1.0 version's default Windows tiles are not that good but it is bundled with DawnHack tiles.

For discussion, join the IRC channel #unnethack on irc.libera.chat or post to rec.games.roguelike.nethack.

For those curious what is added in UnNetHack, here is the Change Log that list major changes. If you want to see a complete list of changes, you can take a look at the commit browser.

The latest development source code is available from the Git repository, and there are several public servers where it can be played online.

Version 5.0.0 adds the Convict role, with its associated equipment and monsters.

Several features are incorporated from SLASH'EM:

UnNetHack also fixes many vanilla bugs, such as the Astral call bug. Some of the changes made between 3.4.3 and 3.6.0 were taken from, or inspired by UnNetHack changes, and other variants incorporate content that originally appeared in UnNetHack.

Version 4.0.0 shortens Sokoban to three levels, adds new puzzle designs, and from UnNetHack 4.1.1 onwards, cheating in Sokoban does not incur a Luck penalty.

Certain special levels have been modified or given alternate versions, including the Castle, Fort Ludios, the Valley of the Dead, Moloch's Sanctum, and the lairs of the various demon lords. Listed here are examples of some of the different level variations:

Lots of new maps for Big Room are also added.

Random level generation has also been modified. In addition to new special rooms, wallified corridors, and various other changes, the dungeon now contains random vaults that add significant variety to what the dungeon can look like.

Moloch's Sanctum has been changed significantly. It now features a modified map with two sections separated by an expanse of lava and a double drawbridge. Inside the inner Sanctum, the initially peaceful priest of Moloch is accompanied with Cthulhu, who now carries the Amulet of Yendor, and who reappears a few turns after being killed. The Amulet teleports whenever it is dropped, so after killing Cthulhu for the first time the player must locate the amulet within the level. This may require continuing to fend off Cthulhu—unless the player finds a way to get rid of him permanently.

Many new monsters[2] are from other variants.

Dragons have been substantially modified in UnNetHack (more info on Dragon#UnNetHack).

Changes to The Banes:

Wands will now turn to dust after the first time they are wrested, however, the odds of wresting have been greatly increased, and is dependent on BUC.

When a cursed object is fired or thrown, there is a chance that it will hit the ceiling instead of its target.

Wishing is less accessible—wands of wishing are generated already recharged once, and are the only source of wishes for magical items. Non-magical wishes are still available from magic lamps.

Thrones no longer grant wishes in any form.

"This is out of date. UnNethack's latest release is 5.2.0, which makes some important changes, for example to Chromatic dragons and their mail. Also, source references will have to point to the git repo now, since the subversion has been archived."